Skulls of the Shogun is a casual take on the turn based tactic genre that brings players into feudal Japan to battle against their former lieutenant that has stolen their place in the afterlife. With simple core mechanics but plenty of strategic variety to explore you’ll find adequate strategy amongst single player and multiplayer modes.

Originally launched as an Xbox Live Arcade and Windows title in 2012 Skulls of the Shogun slowly expanded across a number of other platforms, expanding it’s mobile and console reach off the back of its launch success. Story and mechanics wise Skulls of the Shogun is the same across all of these platforms with the game set deep within feudal Japan with players leading General Akamoto in a war against his lieutenant in the afterlife who has stolen his identity and thus claimed his rightful place in the afterlife 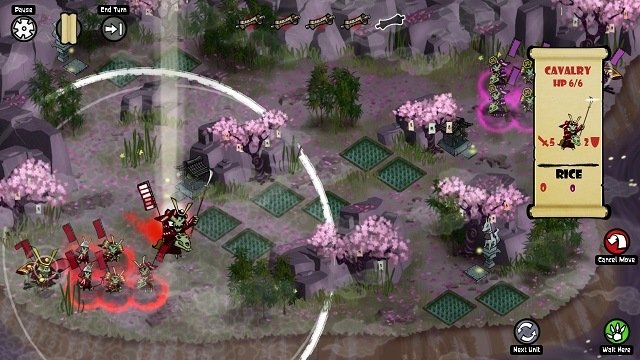 It’s a setting that is clearly portrayed in the undead art style of the game and provides some unique character although isn’t likely to be front of mind at all times given the otherwise simplistic storyline.

What will attract you to the Skulls of the Shogun though is the combat and mechanics which take the fundamentals of strategy title and presents them in a simplified manner while retaining most of the underlying strategy. This starts from the ground up with a small number of unit types to use on the Japanese themed battlefields made up of infantry, cavalry, archers and 4 unique types of monks. Each comes with their own obvious advantages and disadvantages requiring players to balance the ranged defence capabilities of archer units with the aggressive nature of cavalry. All of these units are under your command as General Akamoto who finds on the battlefield as well although his death will result in defeat. 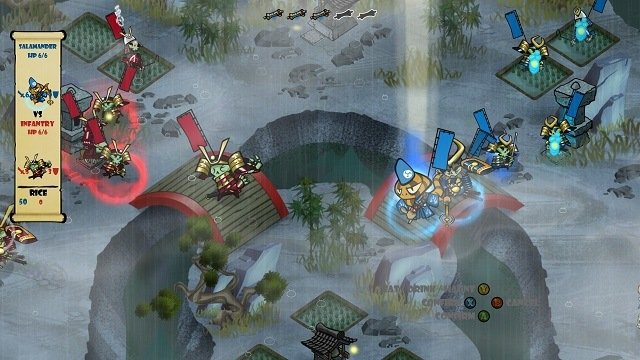 Each turn players are given 5 moves which must be used between their army to move and attack and keeps each turn a simple affair. Unlike other games that might use a square or hex based map movement in Skulls of the Shogun is much more fluent with no grid present at all, using a movement circle instead. This allows you to move units more freely in comparison and has also managed to prove easy to control across both PC, consoles and touch devices.

With the small unit pool and number of moves one can make during each turn Skulls of Shogun boosts it’s strategy through 4 key additional mechanics in the form of haunting, monks, skulls and spirit walls.

Haunting for example is fundamental to victory and requires players to haunt rice paddocks spread across the map to turn into spendable resource at shrines. These shrines provide one of the four aforementioned monks who come with their own unique spells that can dramatically alter the flow of combat and your tactical advantage if acquired. 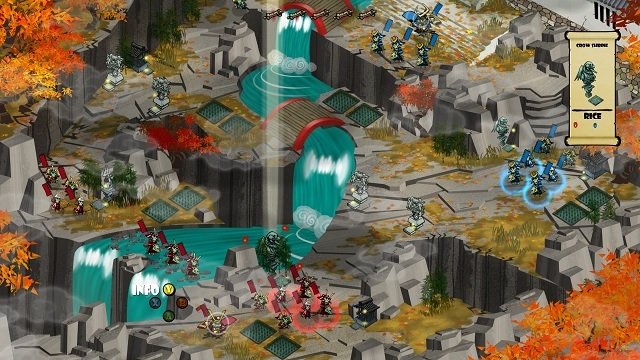 Meanwhile skulls serve as a second resource which directly buff troops by eating the skulls of their slain enemies on the battlefield. To counter these three aggressively minded mechanics a spirit wall mechanic that boosts the defences of units standing next to each other ensures that you are tactically equipped for both styles and appropriately rewarded for moving between the two as required.

With the small unit pool supported by these additional mechanics Skulls of the Shogun falls into the sweet middle ground of providing a simple but never overwhelming strategy title with players given ample choice to consider on each new turn.

Skulls of the Shogun