Sonic Dash lets you play as your favourite hedgehog in an endless runner that feels very much like a Sonic game with boss battles, crazy track designs and all your favourite characters from the franchise within your mobile device.

Sonic Dash gets all the fundamental elements of the genre down  with responsive controls, enjoyable graphics and a good amount of variety in terms of track to ensure that it competes against other endless runners on gameplay and doesn’t rely on its namesake alone to attract players. 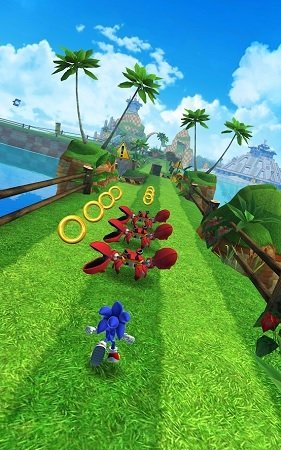 Players originally control Sonic but can eventually unlock various other characters from the franchise including Tails, Amy, Knuckles, Shadow, Cream, Rogue and Blaze. Unfortunately these characters all require red star rings to unlock (the paid currency of Sonic Dash) which means you’ll either have to invest some money into the game or grind out the game significantly to earn a steady drip feed of these.

The game uses a traditional three lane approach with players swiping their finger to move between lanes, jump and roll under objects. Sonic Dash features quite a few enemies along the way as well which can either be avoided, jumped over or killed with by a rolling manoeuvre and adds an element of action on top of the core endless running mobile game formula. 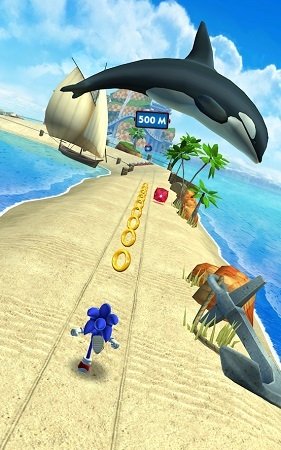 Of course as a Sonic game you’ll be collecting golden rings as you zoom around the randomised game tracks which can be spent on various upgrades and boosts for future runs. Rings will be dropped if you hit an enemy and if you have zero rings at the point of collision then it will result in a game over. This design ensures runs are generally a bit longer in Sonic Dash as you effectively have two lives that can regenerate by collecting rings.

To ensure you’ll earn some rings for each game that you play Sonic Dash lets you bank your rings every time you encounter a spring board which will also propel you onto a fresh game track and potentially change the setting from one of the available biomes.

Power ups within an actual game run are few and far between in Sonic Dash and encountering them is quite a rarity when compared to other games. There also isn’t much variety here with only a shield to protect you and a magnet to make collecting coins easier available. Players do also have a dash skill at their disposal though which fills up over time and allows you to charge through everything to gain some extra metres travelled or simply overcome a complex section of track. All of these power-ups can be upgraded with coins to improve their efficiency and is vital to making any progress as they are all quite weak in the un-upgraded form. 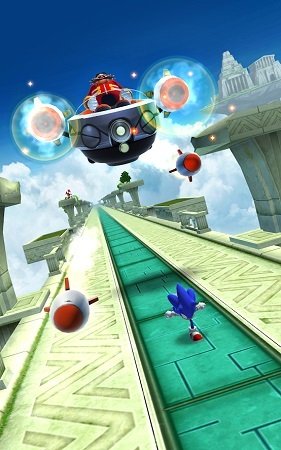 The only real form of longevity in Sonic Dash comes from the leaderboard system where you’ll fight for better scores than your friends. With this element relying heavily on one time boosts to increase your score multiplier though it feels a bit hollow and less about how good your endless running skills are and more about how committed you are to grinding items or willing to open up your wallet.

Sonic Dash does well to capture the Sonic experience in an endless runner and will prove to be a real treat for fans of the long running franchise. The excessive ads, small number of power-ups and poorly designed score system does mean it won’t be a permanent fixture on your home screen though.