Soul Saver Online (previously published under the title Ghost Soul Online or simply Ghost Online) falls in the 2D side scrolling MMORPG genre with a similar aesthetic design to the popular MapleStory. Having been online since 2012 Soul Saver Online has gone through a number of revamps during that time which have left it with a vast content library for players to explore while maintaining a focus on diverse PvP for fans of fighting against other players.

In terms of lore Soul Saver Online is set in a fantasy world where evil spirits have slowly been building up over decades which have now reached a tipping point. These spirits are the spirits of evil people who for one reason or another were unable to move on in the afterlife so they decide to stick around and cause trouble for the living instead. The world is now locked in a vicious cycle with no hope of ever completely eradicating the evil as the numbers are beyond any containable level. Your role in this universe is to help the NPCs in desperate need of a saviour which requires quests and boss battles in the process. 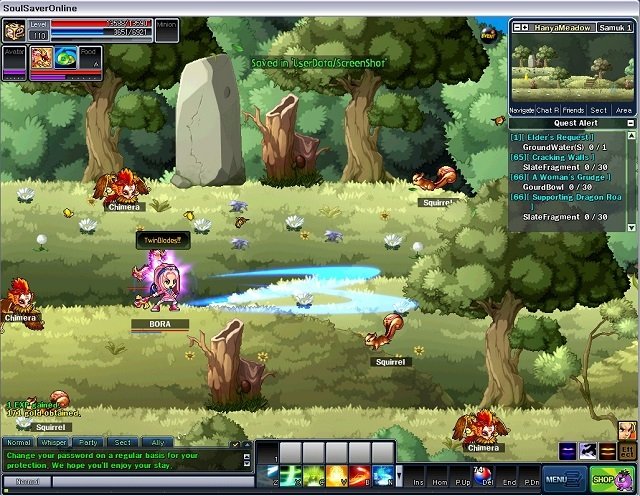 Character creation is fairly simple in Soul Saver Online with players given some basic options regarding their characters gender, eyes, hair, weapon and starting clothes as you would expect to see in comparable titles. Players familiar with MapleStory will instantly recognise this screen as it’s very much inspired (borderline cloned) from that game with the similarities not stopping there either.

Once you’ve got your character created players can enter the game world and go through the standard tutorial screens to help familiarise you with the game world, basic mechanics, controls and everything in between. At level 10 you’ll advance from a novice and be able to accept your first job, which each come with their own skills and further advancements that also dictates your available equipment. Jobs includes assassin, fencer, magic user, fighter and an archer class that provide plenty of diversity with familiar archetypes. 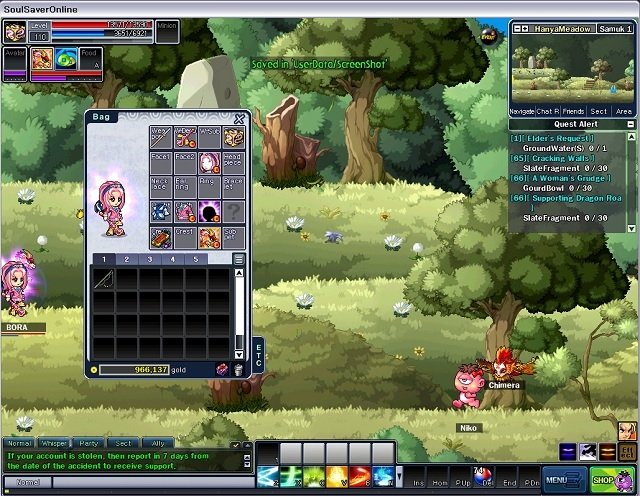 Soul Saver Online primarily splits these second tier job advancements by weapon types as well as some core playstyle differences. The archer class for example can advance to an arrow based archer for long distance or the cannon archer that a specialist in multiple enemy attacks. Similarly fan magic users have devastating fire magic while wand users prefer the ability to freeze enemies at the cost of raw damage.

After accepting your job class you’ll go about doing the usual quests and slaying any monsters that get in your way as you would in any MMO title. Soul Saver Online does have two important unique game systems that help set it apart from other games in the genre and somewhat make up for the shortcomings in other areas such as the game translations. The first is the monster encyclopedia that keeps track of all the monsters that you encounter by recording their names, level and item drops to give you an in game reference. In order to fill out an encyclopedia entry players will need to collect 9 pieces of each monster from farming them either during quests or regular training. 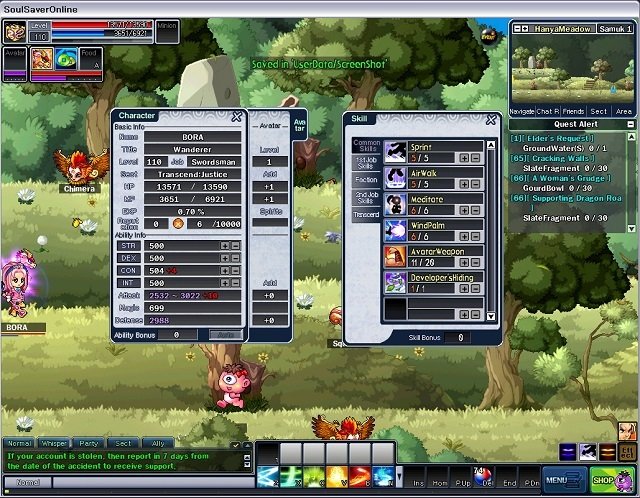 The second unique element to gameplay is spirits which are dropped by monsters that you kill to tie into the underlying law of the world. There are six different forms of spirit that can drop and each helps you in a different way in increasing your own power. Purple spirit can be accumulated for equipment upgrades, red and yellow give you fury, blue and green recover SP to use skills and white spirit restores your health. This spirit system helps add another element to monster looting and helps keep combat fluent and less reliant on potion spamming as you have to play around the availability of spirits that are dropped.

Outside of these 2 unique approaches to the MMO genre Soul Saver Online is essentially your standard MMO adventure with ample questing, bosses and economy mechanics for players to engage with as they wish. Supporting your PvE and PvP adventures you’ll find a healthy soundtrack that varies based on location to give you a sense of different areas on top of the visual designs.

While it’s got a few unique ideas and some of the best PvP in the 2D side scrolling genre Soul Saver Online is ultimately let down by poor translations and an overall clunky feel to gameplay that reflects a lack of attention to detail across the board.

Games Finder is a Steam Curator and featured in the aggregate review scores data of MobyGames and Neoseeker.
FEATURED ON
Games Like Grand Chase, Games Like MapleStory
1 COMMENTS
LEAVE A REPLY Cancel Reply