Build and maintain your own space station in Spacebase DF-9 a game of ships, asteroids, aliens and more. You’ll get to assign jobs to the citizens that you attract while you try your best to keep them alive and grow your space station. 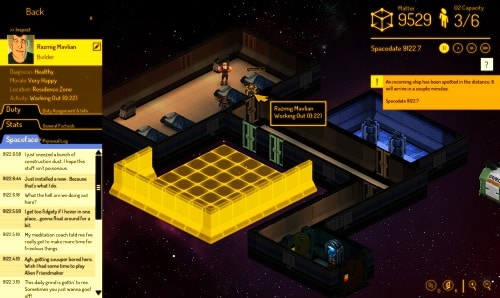 At the start of your Spacebase DF-9 adventure players will get to choose which part of the galaxy they want to attempt to settle in. Each location offers different Stellar Density (game currency), warpgate proximity (think of this as galactic foot traffic), threat levels which change the number of hostile encounters and magnetic interference that will alter the number of derelict vessels that cross through your region of space. This feature allows you to mix and match your difficultly setting and also shapes your game experience to bring strong replay value to Spacebase DF-9.

Once you’ve selected your space location players a seed of settlers will be sent to that location at which point the player assumes control of 3 space settlers who emerge from their space pod with limited oxygen reserves. As such your first task is too quickly develop a basic base that will produce oxygen for your occupants, refine the material you mine from asteroids, create food and give them a place to rest.

Building instructions are issued with your mouse with players able to create a room by dragging their intended design across the game grid. It’s a very simple process and with the game pausing while in build mode you can take your time to craft a very deliberate space station.

Once rooms a built they can be assigned a zone which defines their purpose and then filled with various objects to fulfil that. Zones include things like airlocks to allow your citizens to come and go from your space station, life support rooms to generate oxygen, residence for sleeping quarters and the all important pub.

When your base framework is in place the games depth starts to become more evident as you’ll mine out the asteroids in your area for precious resources, assign jobs to your citizens and slowly expand your base in size and number of people. Every single citizen is unique with their own race, stats and job which players can assign based on their speciality (or develop them in a certain direction instead depending on your needs). 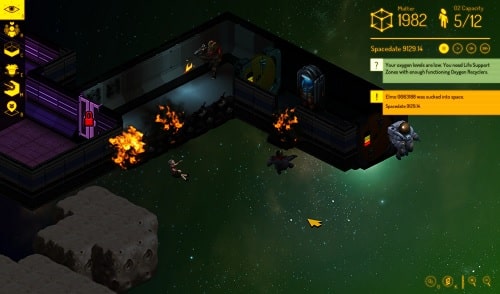 Jobs include the basic builder, miner and technician to the more specialised roles of security, bartender, doctor and scientist which become important further into your game. To increase your chances of survival as you grow in size you’ll have a wealth of research and equipment to unlock.

Spacebase DF-9 offers lots of depth and an interesting mixture of strategy and building simulation game that makes it a real gem. The game could have been much more though with the developer abandoning the game before it ever reached its potential. With many bugs and glitches the experience can quickly become frustrating although your mileage will vary.

This review was first published on January 29, 2014. Read our update policy to learn more.