Spectrobes is a sci-fi themed Pokemon style adventure that has you reviving fossils and using the creatures you create in battle. The game was published by Disney Interactive Studios for the Nintendo DS with sequel on the Nintendo Wii (Spectrobes: Origins) and another DS game (Spectrobes: Beyond The Portals). 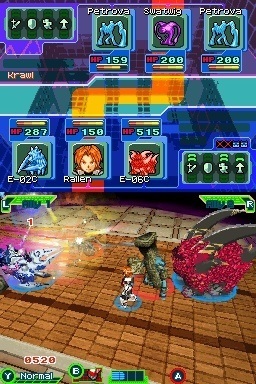 During the game players take control of Rallen who is part of the Planetary Patrol, he is an also eager and skilled pilot which often lands him in trouble. Rallen is also the only person who can control the Prizmod, a device that is capable of communicating with the Spectrobes.

The story follows Rallen after he and his partner Jeena respond to a distress signal on an outer planet. They find a single survivor by the name of Aldous, an old man who has been in stasis for sometime. He then alerts the team to the presence of an evil race of Krawl who are attempting to eat and destroy all the planets in the galaxy.

In order to prevent the Krawl from destroying everything Rallen and Jeena harness the power of the prehistoric creatures known as Spectrobes who possess incredible power. In order to release this power though Rallen and Jeena have to dig them up and bring them back to life. There are over 500 unique Spectrobes for you to find and train up into the ultimate fighting force. 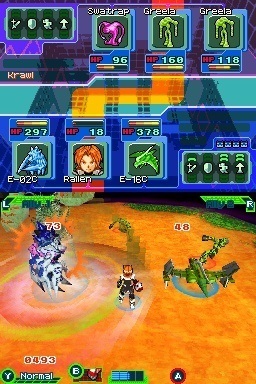 The Nintendo DS is definitely used to its full potential for fossil revival. After scanning an appropriate fossil you’ll have to dig away at it with the touch screen, blow away the excess with the microphone and then the final revival stage requires you to use the power of your voice to complete the resurrection.

Exploring the various planets and digging up fossils will consume most of your time in the game and thankfully both game aspects are very well-polished which will ensure you stay entertained for the entire game.