Opting to take familiar platforming mechanics from other games but implanting 4 player competition is SpeedRunners, a title that is all about blasting through various levels with random players or friends in an attempt to be first across the finish line across the available game platforms. 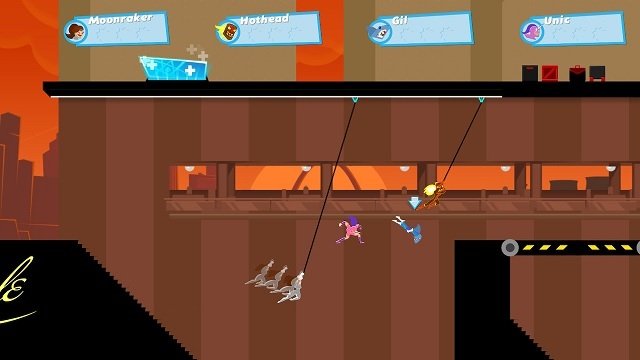 Supporting 4 players SpeedRunners features platforming with grappling hooks, an interactive environment and plenty of power-ups along the way as well as you dash past your opponents. With these mechanics and general game design SpeedRunners happens at a blistering pace which results in frantic level races between players. Victory is not guaranteed by just being kick on the trigger either with strategic well timed use of the available power ups allowing you to drop obstacles, launch rockets or place mines to hinder your opponents movement while taking advantage of boosts to propel you forward as well.

SpeedRunners has one last trick up it’s sleeve in terms of game design with the lead runner being the one that sets the game pace. In practice this means that the camera will only follow the lead runner and those that fall behind (off the screen) will die for that round. 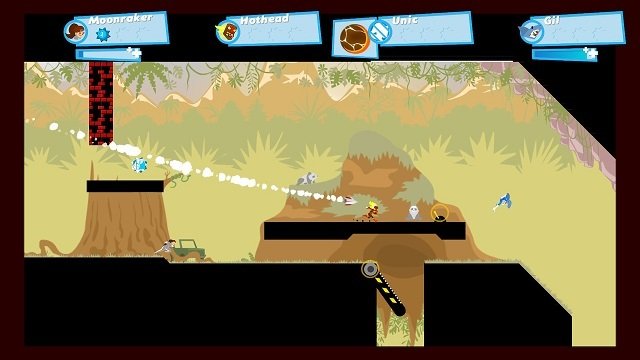 With a complete absence of finishing line and circle track designs it’s as much of an endurance race as it is one of speed as the round only ends when there is a single player remaining. With each elimination the screen size shrinks smaller and smaller making the fight between the last 2 runners extremely intense and also helps to combat exceedingly long game times.

Supported these contests of skill, wit, speed and endurance is the solid platforming fundamentals that combine movement, jumps and grabbling hooks to move you swiftly and responsively between A and B. Map design is similarly of a high standard and manages to feature multiple paths that provide risk and reward trade offs where the perfectly executed move may send you to the front of the pack. 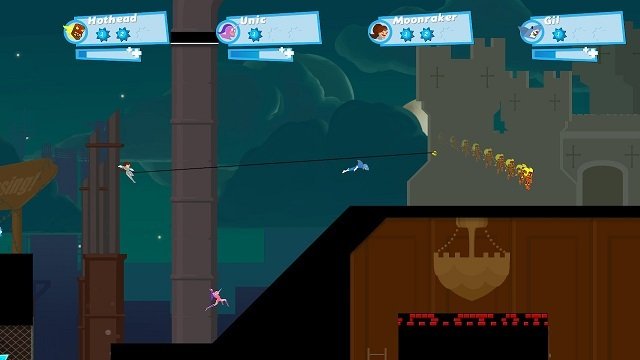 The end result as all of these mechanics come together is a challenging and varied 2D platformer that is ideal for local gameplay but also offers all the online functionality you need to never be without a match opponent.

This risk-reward map design pairs well with Mario Kart like power-ups that let you either gain an advantage or put enemies at a disadvantage for you to capitalise on. Be it a box to drop right in front of their face, rockets to hit them with or a speed boost for yourself these can also quickly turn the tide of the race and provides just enough randomness to give everyone a decent chance at being the last runner standing.

Games Finder is a Steam Curator and featured in the aggregate review scores data of MobyGames and Neoseeker.
FEATURED ON
Games Like Super Smash Bros, Games Like Transformice
LEAVE A REPLY Cancel Reply