Spelunky is an action adventure game that has you exploring the depth of various randomly generated caves. On your journey you’ll encounter countless enemies, impressive treasures and much more. 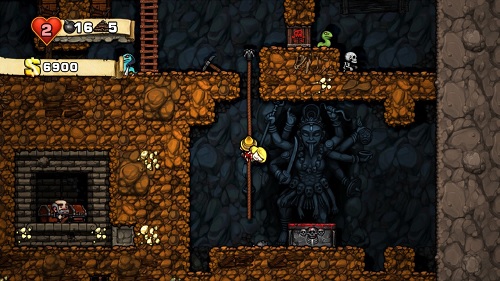 The game received a rebirth between 2012 and 2013 with an enhanced edition making its way to various platforms that greatly improved the original gameplay and visuals. Players can still access the original for free from the official website.

In Spelunky you control an unknown adventurer with the goal of exploring the various underground tunnels and collecting many different treasures. Each level is randomly generated so there is also a new experience to test your spelunking skills. The catch is that death requires you to start at the very beginning of your adventure which makes reaching the deeper levels (and best treasure) no easy task.

At your disposal you’ll have your trusty whip and the weight of your own body to squish enemies. Players also have access to a small supply of bombs, arrows and ropes to help them in their adventure. Equipment doesn’t stop there though in Spelunky with a huge list of passive accessories, throw able items and combat gear to use.

Enemies are one of the most impressive features of Spelunky and combined with the randomly designed landscapes creates a huge amount of replay value. The game features nearly 50 different enemies which all have their own spawning areas, stats, sizes and require different strategies to defeat. 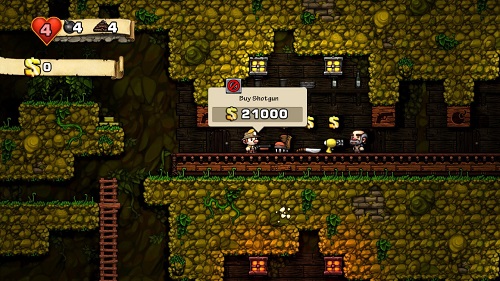 Spelunky doesn’t force you to tackle this challenge alone with co-operative options available so you can join up with friends or even battle against them.

If you love the action and exploration of games like Terraria or Rogue Legacy you’ll like what Spelunky has to offer. The game is extremely easy to pick up and play but has so much hidden depth for you to explore and enjoy.

This review was first published on April 30, 2013. Read our update policy to learn more.

Games Finder is a Steam Curator and featured in the aggregate review scores data of MobyGames and Neoseeker.
FEATURED ON
Games Like Faster Than Light, Games Like Risk of Rain, Games Like Terraria, Games Like The Binding of Isaac
LEAVE A REPLY Cancel Reply