Embedding the core arena shooter with a Portal like mechanic Splitgate: Arena Warfare is a fast paced shooter with a flair of out of the box thinking. For those seeking the pace and action of a genre with roots that go back to the early days of gaming you’ll rejoice at the gameplay Splitgate: Arena Warfare tries to bring back into the gaming market. 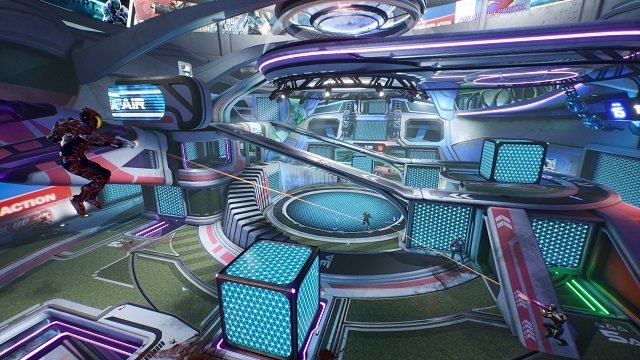 The foundation of this arena inspired shooter includes 10 player matches, tightly designed maps to force varied combat encounters and a host of fast firing guns without significant recoil. The feature that separates Splitgate: Arena Warfare though is the portal mechanic that lets players cast a portal on surfaces around the map which can be be used to gain a movement advantage allowing you to reposition on an unsuspecting foe. Portals are equally free for opponents to step through though but only the caster can see through which does create some interesting outplay potential at the same time. These portals are fired from your trusty side equipped portal gun using Q and E which alongside a jetpack for basic flight rounds out the equipment of Splitgate: Arena Warfare.

For maps you’ll find a total of 9 with futuristic designs from Olympus that is a floating arena in the sky complete with a central sniper tower and portal platform underneath for those that fall off the edge. In contrast you’ve got the Club Silo nightclub which leverages greater verticality across the red and blue bases fighting to take place at different elevations. At the end the other end of the spectrum is Helix which favours tight corridors but also equally long hallways where corner fighting with close quarters weapons will prove most effective with the remaining 6 maps being a mixture of these three archetypes and have some resemblance to arena shooters long past like the Halo franchise. 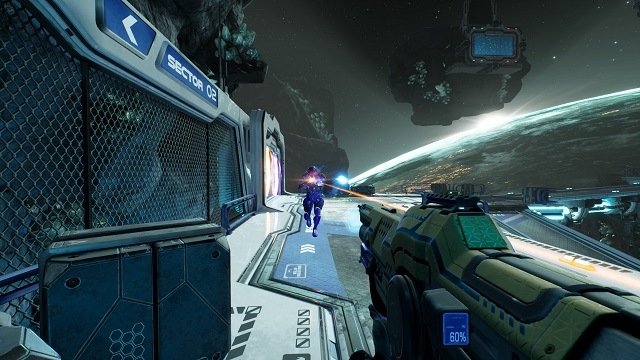 All of these are available across the list of game modes although like any shooter some are better suited to particular modes. These modes are the usual affair with ranked playlists, casual, training and custom games across modes such as team deathmatch, free for all, king of the hill, domination, capture the flag and other more unique variations with smaller populations.

Available weapons across these maps include several rifles, a SMG, shotgun, sniper, pistol and several power weapons (some of which are powerful versions of the core weapons) that spawn occasionally at set points. Power weapons create an additional action point around the map and also allow players to wield deadly rail guns and rocket launchers. The staple grenade rounds out your weapon options in Splitgate: Arena Warfare although is not a health damaging tool. Instead, Splitgate offers players an EMP grenade used to deconstruct portals. While playing your way through the competitive or casual offering players will also accumulate skins for their armour slots to separate themselves from the competition and provide something to chase.

This review was first published on November 29, 2020. Read our update policy to learn more.