Spore combines a number of genres together and ultimately unleashes players out to space after starting as a single cell organism. Giving you full control over how your species of creatures evolve throughout their development alongside their overall philosophy and technology Spore is a rare experience to shape the planet and the galaxy. 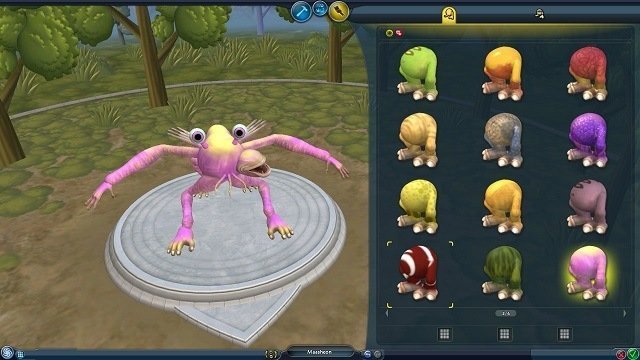 The shining star of Spore though is the creation system that gives players a huge amount of options when creating their creatures which has led to plenty of creative and inappropriate looking creatures which on release was also supported by an online sharing system. This depth of customisation in Spore and the use of the creator tool also extends to buildings, vehicles and eventually spacecraft when players reach the final stage of the game. For those that lack the creativity gene or simply want a more streamlined experience and don’t see themselves spending hours within the tool a healthy number of default creations from the Spore team are available. Spore also pulls a random assortment of these or online creations into each of your worlds and planets which ensures a new unique discovery on every space jump.

Choosing from a single planet to start your adventure your ultimate objective in Spore is to adventure into the centre of the galaxy. The journey to this end goal is long though with players starting as a single cell organism in the primordial oceans. Known as the cell stage players are required to eat smaller organisms for food to slowly grow in size while avoiding the larger predators that lurk in the depths.

With time players can unlock useful tools such as spikes, electricity, fins and importantly a range of mouths which change your little creature between herbivore or omnivore accordingly. This choice is one that is replicated in various ways throughout the remaining life stages that Spore explores and represents the difference between an aggressive species or a friendly one with later stages giving the ability to sit somewhere in the middle. 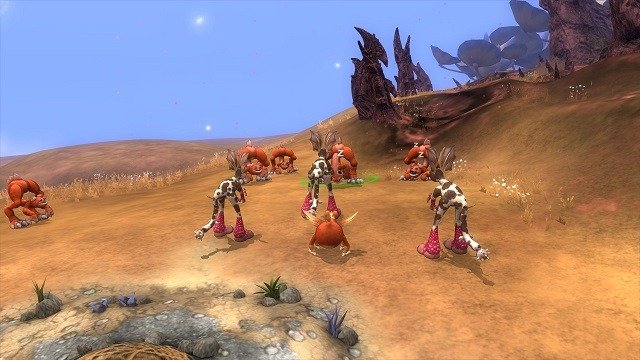 Post cell stage players will step onto land and enter into the creature stage which emphasises a small gathering of your species in its search for food and defending itself from predators while again dramatically increasing the range of body parts available allowing you to create 2, 4 or even 10 legged creatures. With appropriate objectives ticked off the creature stage will quickly morph into the tribal stage where acting in unison is vital for survival.

This tribal stage represents one of the first key shifts in game mechanics where players transform from controlling a single creature to a small tribe of a dozen creatures. Similar to the creature stage though there is an emphasis on friend or foe with players having to gather shared resources that can be translated into weapons or instruments which serve as the first tools of our species.

From here another dramatic leap forward into the civilisation stage takes place where your connection to individual creatures of your species is removed entirely. At the same time the whole planet becomes available for exploration as opposed to a smaller continent region of the previous stages. Along with this jump in scale is the shift to real time strategy mechanics with maximisation of city buildings alongside creation of land, sea and air units being the fundamental mechanics. 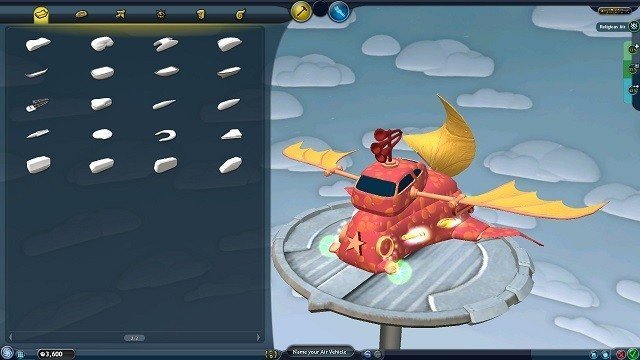 After dominating your opponents with war, trade or religion you’ll be able to unite your species under a single leadership and make the progression into space which is Spore’s end game experience and trumps the previous stages combined in terms of content and length of time you’ll be engaged with it. It is at this stage where players can truly begin to make progress to the centre of the galaxy with spaceships to explore, galactic empires to interact with and even terraforming planets to improve your resource (spice) generation for ship upgrades. Some light elements of diplomacy and relationship management also come into play here with the other civilisations transitioning the RTS mechanics of the previous civilisation stage into 4X mechanics.

By not limiting itself to a single genre Spore stands out amongst the gaming scene with a realistic albeit fast paced exposure to the world of evolution. In the end it’s a game that you’ll earn the most value from by spending hours in space or the creature creator as the other stages lack the depth or impactful choice to be a gaming experience in their own right or warrant a significant replay.

Games Finder is a Steam Curator and featured in the aggregate review scores data of MobyGames and Neoseeker.
FEATURED ON
Games Like Black and White, Games Like FeralHeart, Games Like No Man's Sky, Games Like WolfQuest
LEAVE A REPLY Cancel Reply