Exploring the more silent and devious side of being a spy is SpyParty with a competitive computer game that has you battling your friends in sneaky ways. Developed by Chris Hecker SpyParty is a unique game that sees players attempting to fool an opponent into thinking that they are just another AI controlled character amongst the crowd while the other attempts to snipe the player by identifying their actions that separate them from the AI. 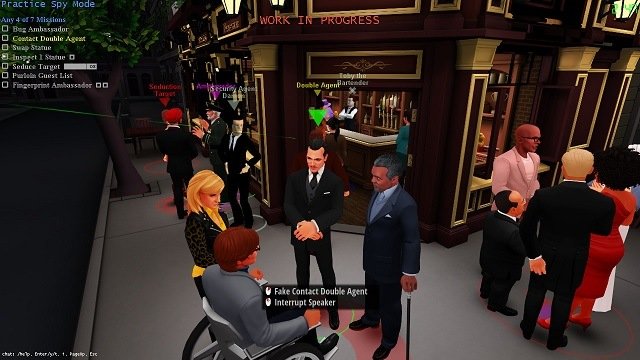 Accordingly SpyParty features two roles for players to choose from with one taking the role of spy within the room (alongside vast numbers of AI characters) while the other plants themselves outside, viewing the activities through the scope of their sniper rifle and binoculars. When playing the spy your objective is to complete a number of missions within the time limit such as bugging the ambassador in the room, making contact with the double agent or swapping a statue among others that require interaction with the environment or AI characters. While playing as the spy you’ll move your character through a third person view, giving you ample vision of the area along with a number of tools that can be used to throw the sniper player off your scent. To give some feedback of information to the spy the sniper is equipped with a laser beam that shows the direction their weapon is currently pointing.

On the other hand the sniper role has full vision of the game room from several angles with options to zoom and mark interesting targets for better tracking throughout the game. To make matters more difficult for the sniper role you’ll only have a single shot to hit your mark which creates plenty of time pressure as you balance gathering information with taking a shot before the spy player can complete all their missions and be careful not to miss entirely. 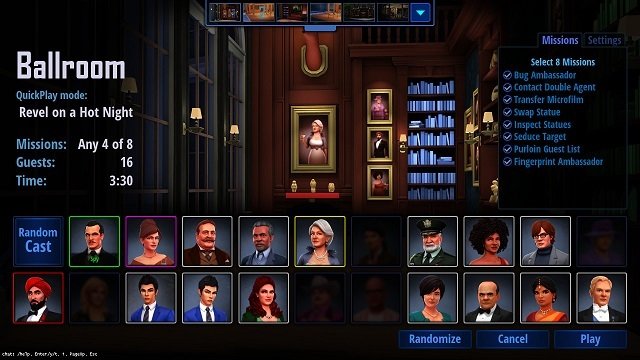 It’s this core game structure that remains the same throughout SpyParty but still ensures ample variety and replay potential through the likes of different maps, combination of missions, the varied cast of characters and of course the unique play styles of other players. All of which are likely to continue to grow as the game develops further into a full release title given its launch as an Early Access title.

Currently available venues include locations such as the aquarium, ballroom, library, pub, terrace and veranda with map design being a key pillar of SpyParty. The aquarium for example includes a special map feature where a shark will periodically block the sniper players view and provide the spy with an opportunity to complete objectives. While there is a practice mode available for players to learn the details of maps and the specific spy missions this does not create a true single player experience by any means. 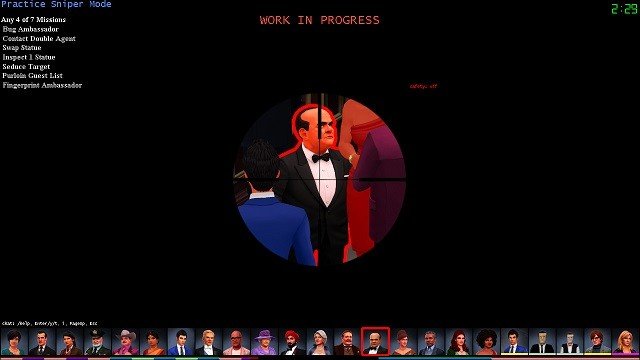 Few games get your heart beating like SpyParty, it’s extremely enjoyable on both sides of the glass as you calculate the best way to complete your missions or carefully observe the party goings to take your single shot on your highest suspect at the party.

Games Finder is a Steam Curator and featured in the aggregate review scores data of MobyGames and Neoseeker.
FEATURED ON
Games Like Overcooked, Games Like Town of Salem
LEAVE A REPLY Cancel Reply