St. Orchint’s Orphanage is set deep in war time where the ongoing conflict sees a dramatic rise in the number of orphans. Not content with standing to the side as the number of orphans grows each day the war continues the player opts to establish and operate their own orphanage which brings with it all the dark and harsh realities of war time. Similar to other games from the same developer St. Orchint’s Orphanage does not shy away from tackling these issues head on and provides a game that is intended to inspire reflection and appreciation through a harsh lens of realism. 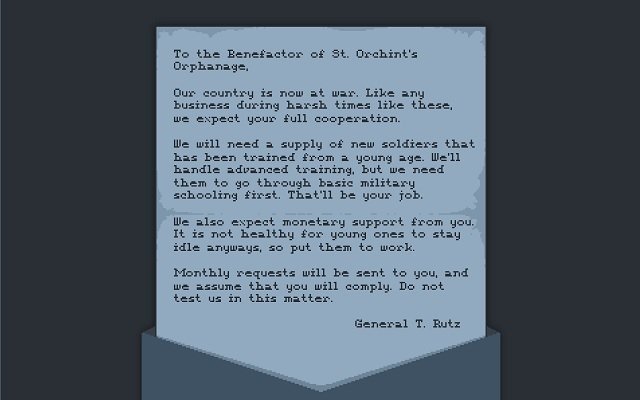 Gameplay of St. Orchint’s Orphanage primarily revolves around the balancing act that it takes to run any business. A fact that is made only more difficult given the orphanage and war time context which presents its own range of unique and unfortunate situations. In the case of St. Orchint’s Orphanage this balance primarily focuses on selecting children to be put through military school to support the war effort (an option that takes 20 in game days to complete) or alternatively sending them out into a variety of labour jobs to generate income to keep the orphanage open.

There are four such jobs available for children to complete during war time which includes the coal mines, chimney sweep, paper boy and sweatshop worker. Each job comes with its own injury risk level, disease risk and income which adds another layer of tough decisions as sometimes you’ll have to put orphans at risk of illness and even death to keep the orphanage running. 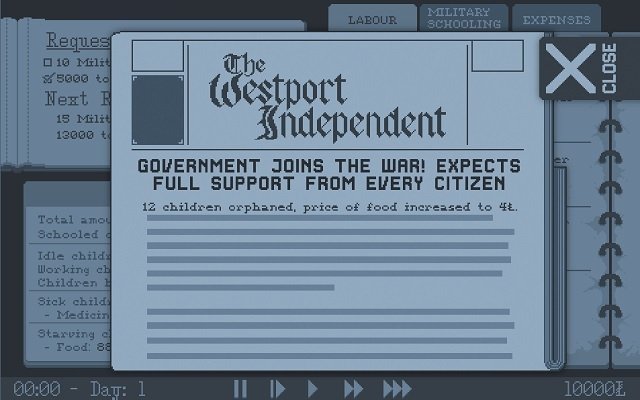 While neither of these decisions are particularly attractive both help support the ongoing operations of the orphanage which wouldn’t be able to operate without these daily hard decisions. Ultimately it’s a “for the greater good” approach with decisions that weigh heavily on your consciousness but are unfortunately necessary. With the growing number of orphans to feed each day the consistent demand funds is never ending in St. Orchint’s Orphanage.

In addition to a daily cost per orphan to provide basic dietary needs from time to time medical attention will also be required at random which can quickly sap player funds when they are needed most. St. Orchint’s Orphanage starts simply enough in this regard with a manageable pool of 100 children in the orphanage and early objectives to provide 10 military schooled children and amass $5,000 worth of funds. Players are also encouraged to stockpile a supple of medicine as this is automatically consumed to combat any disease that orphans acquire. This is particularly important as sick orphans are unable to work which if not balanced correctly can lead to significant drain on your ability to fund the orphanage. 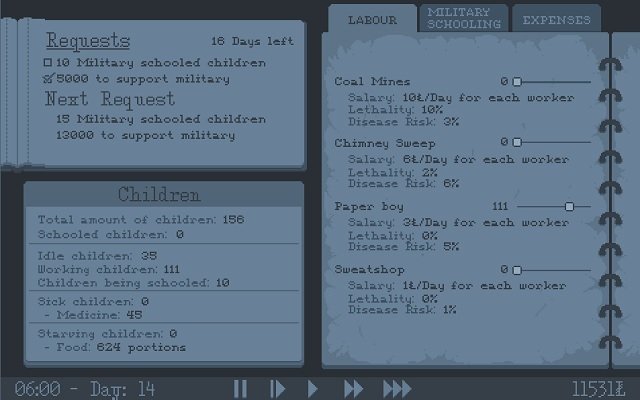 To provide more context to the world around you an players will receive a number of newspaper headlines from The Westport Independent newspaper on a daily basis. These newspaper articles report on current activities in the war which can provide a new batch of orphans or increase the price of food and medicine providing that reactive mechanic that can quickly derail plans and require adjustment. Additionally players will also get the odd heartbreaking letter from the orphans themselves, it’s all designed to bring the terrible impact that war has to ordinary people into the front of your mind.