Star Ocean: The Last Hope is an action RPG from Square Enix. Originally launching on Xbox 360 only the game eventually came to PS3, PS4 and Windows with a few improvements. 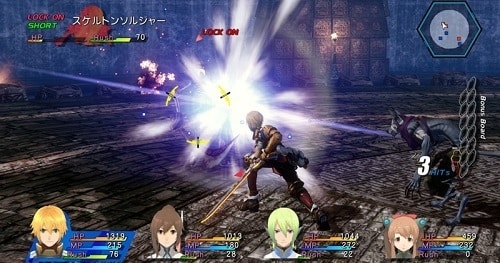 Choosing a science fiction setting the game is set after a third world war has devastated the Earth leaving the population to go underground. In order to save the human race the decision is made to find a new home planet through space travel. This is where the protagonist enters the fray as they board one of the first conveys to a new home, which unfortunately ends in a less than ideal situation as the other ships in the convey go missing and leave you alone on a new planet environment.

This setting means exploration and combat are the two key mechanics of your adventure as you explore what your surroundings have to offer and encounter less than friendly creatures. It’s heavily driven by very long cutscenes and plenty of text so for those players that prefer an action driven game you’ll want to look elsewhere.

Combat relies on real time party based combat with players able to switch their active character which allows you to experience a range of combat styles. These styles are split between two different fundamental styles, one that is offensively orientated and the other which is defensive focused. This combat is initiated when players encounter an enemy while enjoying the open world exploration.

Ultimately there are 9 playable characters which come with extremely in depth back stories that really flesh out the game world in addition to an already well designed main plot line. This ensures you’ll have a real connection to each character and the solid AI prevents you from getting frustrated with them in the field.

On the other side you won’t find yourself becoming frustrated with enemies either with Star Ocean: The Last Hope relying on fair game mechanics and great variety to create difficultly. You’ll really need to consider alternative strategies for certain enemies and boss battles are a whole other beast entirely. Star Ocean is also very rewarding of optimal play with a bonus board offering boosted experience and currency.

Outside of the enjoyable combat there is a really deep crafting aspect to the game where you’ll uncover recipes and collect the necessary components. It’s easy to spend lots of time here and is a great way to boost your team strength.

Overall Star Ocean: The Last Hope is a fun and well designed Japanese RPG although does over do the cutscenes.