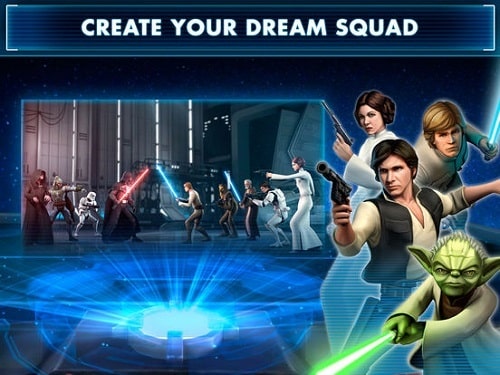 Star Wars: Galaxy of Heroes uses a formula you’ve seen before in other hero collectors but gives it a very glossy Star Wars skin. While this makes it ideal for fans, it also ensures a high quality game that even non fans can get behind.

Starting out in a light side tutorial players will learn the basics of team composition, attacking and using skills. Just like other turn based games you’ll command individual units in turn as you elect to attack opposing units or use a special abilitiy (such as healing or a multiple unit attack). Battles are split across several stages that end with a tougher boss battle such as commander or hero unit.

Star Wars: Galaxy of Heroes features over 80 units for you to craft your team with favourites like Han Solo, Ray, Yoda, Palpatine, Darth Vader and many others. This is then paired with the easier to unlock characters of Royal Guards, Ewok Scouts, Snowtroopers and Jedi Consular. Unlocking said characters uses game currency to buy data cards and can either be unlocked in a single card or more normally are collected slowly with character shards. 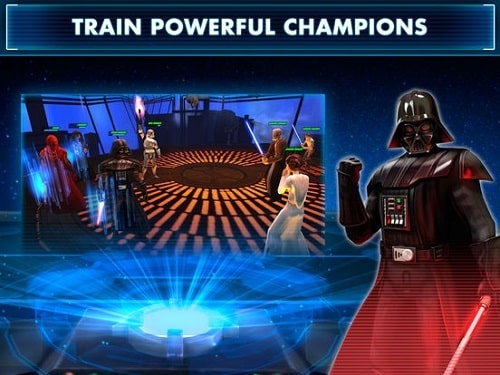 Once unlocked a character can grow in level through training droids, gear you’ll find through battles and eventually even mods. This ensures there is no shortage of avenues for character growth and keep you playing for the long term. This is enhanced further with things like guilds, events and challenges which are slowly unlocked as further progress is made.

Star Wars: Galaxy of Heroes is easily one of the most polished and impressive of the hero collecting games you’ll find on a mobile device particularly for Star Wars fans.

Games Finder is a Steam Curator and featured in the aggregate review scores data of MobyGames and Neoseeker.
FEATURED ON
Games Like Brave Frontier, Games Like Idle Heroes, Games Like Summoners War
LEAVE A REPLY Cancel Reply