Starbound is a 2D side-scrolling game that weaves together creativity, adventure, exploration and action into a galactic adventure. Not limiting itself to a single world Starbound encourages players to explore multiple procedural generated planets where you’ll find varied resources, inhabitants and other challenges.

While Starbound features a number of sandbox design features the core experience still provides significant structure for those that want an overarching purpose to their adventure with the ability to easily swap between story progression and general exploration according to the players whims. The main story itself requires players to visit planets of specific types in an attempt to locate several artifacts that open up the Ark. 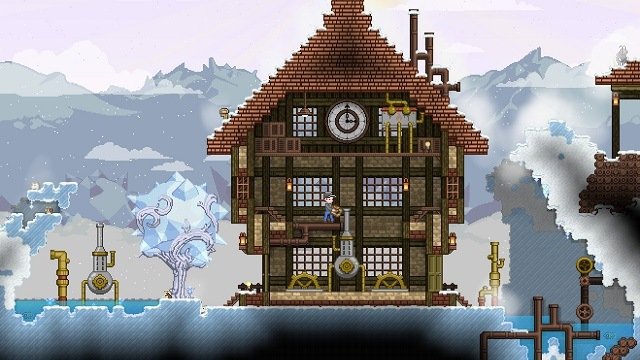 Overall these main missions are just a small piece of your Starbound adventure with significant side quests for ship and equipment upgrades alongside the endless procedural generated missions that are planet specific and provided by the non hostile NPCs that you encounter. Another common end game goal is completion of the Collection Library which is an in game window that fills itself as players collect or encounter pets, action figures, fossils, bugs and cooking recipes throughout the universe.

Further customisation and challenge is available through the three different game modes of casual, survival and hardcore which alter the penalties for death and change some core mechanics such as introducing a hunger mechanic in survival difficulties and above.

To embark on this sandbox and quest filled Starbound adventure players will first need to create their character from the seven game races who bring their own distinct visual styling and unique racial traits, armours and ships that can be unlocked further into the game. Available races include the Apex, Avian, Floran, Glitch, Human, Hylotl and Novakid which includes highly intellectual Apes, birds, robots and even plant based organisms. Starbound also allows this adventure to be played cooperatively with another or with an emphasis on PvP (activation required to prevent unwanted PvP). 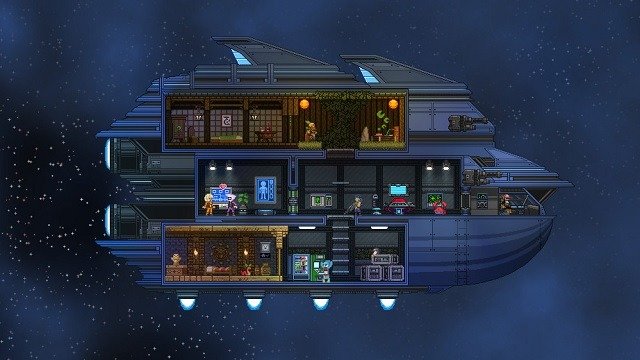 With your character created the core gameplay loop of Starbound is much like other sandbox games with exploration forming a core element and supported by the procedural generated worlds while your ship stays high in orbit above the planet. While on the surface players gather resources, cook, farm, mine and craft while combating a range of menacing creatures, avoiding hazards and even bosses that live underneath the surface with their own debuffs.

Combating these great beasts that lurk underground is no simple achievement and while the 2D game design provides some room for skill to shine often you’ll find Starbound is more about the appropriate setup. This means ensuring you take an appropriate weapon for the challenge ahead from the range of shields, single handed, two handed and ranged options that have various attack patterns, alt abilities and in turn energy cost. 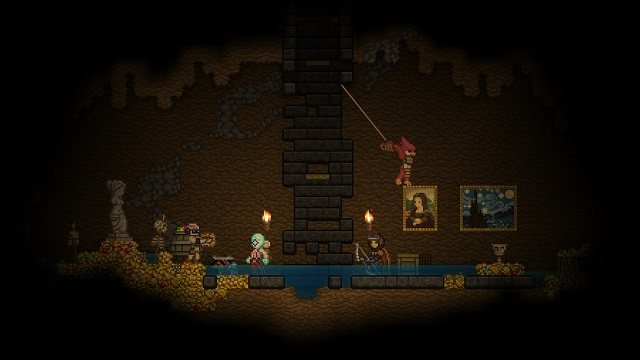 This energy system is also vital in activating technology that the player has in their possession and can recharge overtime when no actions are taken along with equipping energy regeneration improving equipment which often requires significant resource investment to achieve.

When it all comes together you’ll find a wealth of upgrade pathways to take ensuring a single Starbound game can extend for hundreds of hours and the ability to literally jump to another planet when you get bored of your current environment is a key contributor to that.

Games Finder is a Steam Curator and featured in the aggregate review scores data of MobyGames and Neoseeker.
FEATURED ON
Games Like Dont Starve, Games Like Minecraft, Games Like No Man's Sky, Games Like Terraria
LEAVE A REPLY Cancel Reply