Explore a steampunk themed tower defence title with Steampunk Defense. Fight off an evil invasion as you aim to protect your peoples freedom on iOS and Android. 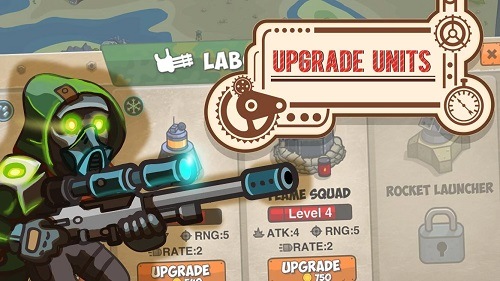 Presentation in Steampunk Defense is a fairly standard experience with players finding themselves on an island landscape with individual campaign icons that represent the game levels. Each level has a reward tied to it a fuel cost and a difficultly option (which alters the aforementioned reward).

Once within a level tower defence fans will quickly recognise the game setup with defensive points that need protection and attack points where enemy waves will flow from. With a number of flag markings between these two points players will build up their defences on these.

Steampunk Defense offers a title of 6 such defensive options that each have their own different uses. Players start with a machine gun and ice bunker unit which form the base for all your levels until further options like the flame squad, rocket gun, tesla mech and sniper. Each of these can be upgraded individually to increase their potency through the gold currency system that can be acquired for watching ads or as level rewards.

Enemy forces are equally varied and come in the usual shapes and sizes, be it fast moving vehicles or basic ground soldiers, utilising the above towers you’ll create powerful strategies to stop the enemy in its tracks. Joining your towers are a range of heroes that bring their own strength and style to the battlefield. Players are limited to a single free hero with the pro version required to unlock additional heroes. 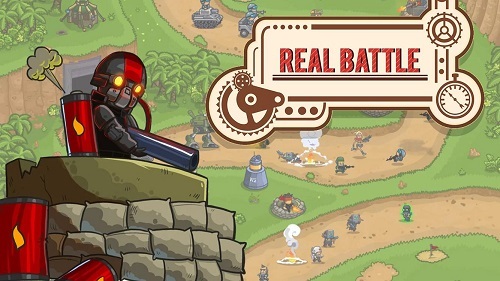 Finally one time use power ups such as TNT can save players if they find themselves in a pickle at the cost of gold. However, this is generally better spent to upgrade your towers rather than once off saves.

In total Steampunk Defense offers around two dozen across 3 islands making it a short but decent tower defence title.