Bringing the popular web game into the mobile environment Stick War: Legacy is a side scrolling strategy game that requires you to manage your resources and summon powerful units to conquer the statue of your enemy.

Offering up a wealth of features in this mobile game Stick War: Legacy includes both a campaign and tournament mode with leader boards for the 3 difficulty levels (normal, hard and insane). You’ve also got achievements to unlock and an extensive in game guide to help you understand the strengths and abilities of each units. 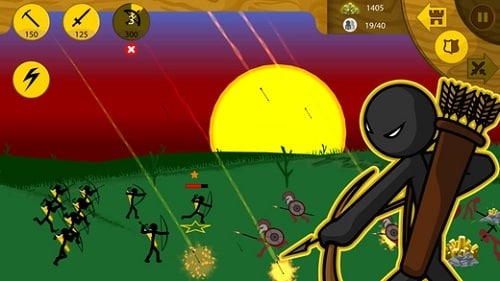 Stick War: Legacy is set within the world of Inamorta which is filled with a number of unique nations that are devoted to their own technology (weapons) and seek to preach it to their neighbours through the art of war. This includes the Archidones who use the bow, Swordwrath who maser the sword, Magikill who possess magic and Speartons who thrust their spear into their enemies.

Your role in this world is to lead your own nation (Order) in a preemptive strike against the individual nations, acquiring their technology along the way and making the world safe for your own nation in campaign mode.

Just like the stick people graphics the gameplay of Stick War: Legacy is easy to grasp with players having their own statue on the left hand side of the screen with the opposing force on the right, with both nations attempting to bring down the statue of the enemy. 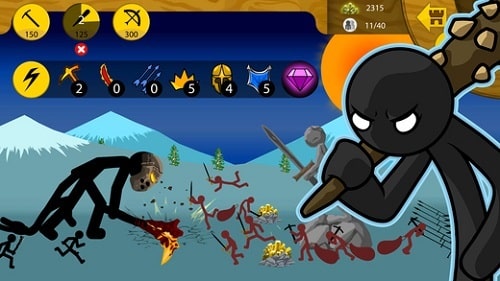 Your ability to do so centres around calling in units onto the battlefield for the cost of gold. With your miner unit as the foundation of your economy to generate extra gold from the stockpiles near your tower you’ll be able to raise an army of swordsmen, archers and other captured technology to push down the enemy tower. Each unit has their own gold cost, recruit time and power so balancing all is important to not be overrun.

In addition to the grand strategy of the core game players can control individual units to help on the battlefield and give active orientated players something extra to do during play time. Players can also customise their strategy outside combat with passive upgrades on gold generation or individual unit attack and defence.