Opting to give players a large array of choice and freedom in completing game objectives and wrapping it in a procedurally generated city is Streets of Rogue, a game that takes inspiration from a wide range of titles and attempts to blend them into one. It’s got stealth, bullet shooters, co-op, RPG and rougelike amongst near endless choice in it’s core design. This unique offering means that Streets of Rogue ticks a range of gamer boxes and thus attracting a broad spectrum of players. 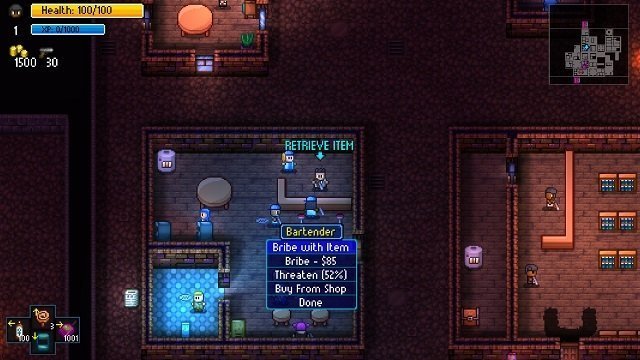 Your objective in the world of Streets of Rogue is to advance through randomly generated game worlds while completing missions and improving your strength for the future levels to come. How you intend to accomplish this is just the first layer of choice that Streets of Rogue offers with a risk and reward trade off in each level. Do you take the extra risk for the small increase in power it might offer? Or do you not take the risk but possibly be under equipped for levels to come? These are the tough choices Streets of Rogue requires you to make in its randomised world.

Each chapter changes the types of enemies you’ll encounter while also altering the hazards that are present such as the park levels which hides deadly cannibals in the trees and bushes in comparison to the city levels that are roaming with police officers. These levels are split into three different stages with the third one being impacted by a disaster which makes your level mission much more difficult. Disasters include the likes of zombie outbreaks, riots and artillery which can complicate matters and add one more layer of variety (and often hilarity).

Said missions contained within each level involve a range of requirements from assassinating a particular target, activating a bunch of switches, freeing a gorilla, acquiring an item from a chest and more randomly generated challenges. While all of these can generally be resolved by shootings guns and asking questions later there are other mechanics in Streets of Rogue that can play to your advantage and are particularly important to utilise on certain game characters who simply don’t have the stats or starting arsenal to follow this aggressive approach. 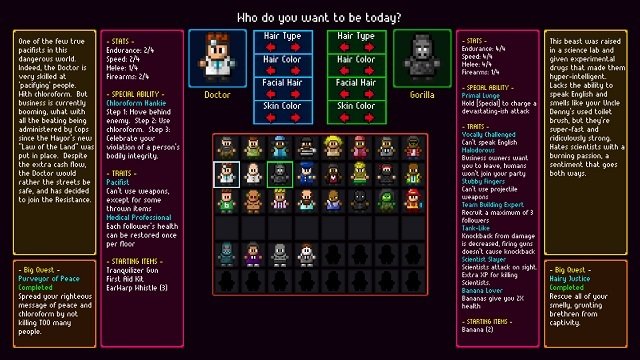 These mechanics include dropping syringes into air filters to kill off enemies with poison, purchasing a slave to do your dirty work or hacking a computer. When combined with the hefty amount of game items that can be dropped, bought and sold there is plenty of combinations that players can utilise to achieve the individual missions. The aggressive path though does seem to dominate Streets of Rogue making the other paths not needed unless you opt for one of the weaker starting classes.

This results in the character you select heavily influencing the mechanics you’ll employ given characters have different stats like health, speed, starting equipment and other abilities. The Soldier for example can run and gun its way through levels quite easily with strong gun skill and regenerating health, reaching a point where they are near impossible to stop which does make for an enjoyable first few playthroughs while you uncover the mechanics but quickly becomes a dull character otherwise. This isn’t a problem by any means though in Streets of Rogue with well over a dozen different characters to attempt to finish the game with along with other game modifiers to create your preferred experience and challenge. 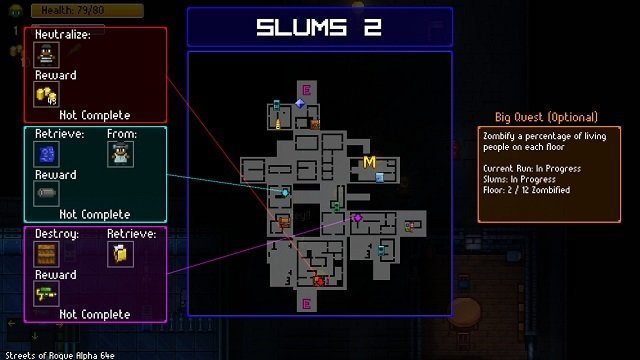 More passive characters such as the Hacker who hacks computers for an advantage or the Investment Banker who is a drug expert require more careful planning and reliance on NPCs to advance through missions and the game chapters. More characters are unlocked with play generally be completing certain activities in game and players can even create their own character if they wish to devise their own mix of strengths and weaknesses. In addition to character unlocks through gameplay new game specific mutations, traits, rewards and loadouts are unlocked to further the game variety and add more breadth as you gain experience in the game mechanics.

Ultimately Streets of Rogue is a game with potentially hundreds of hours of gameplay in it although a complete run can take only several hours. To reach these hundreds of hours will be up to the player creating their own challenges with each character and the mix of mutations which continue to expand with game development.

Games Finder is a Steam Curator and featured in the aggregate review scores data of MobyGames and Neoseeker.
FEATURED ON
Games Like Deus Ex, Games Like Realm of the Mad God (RotMG), Games Like Risk of Rain, Games Like Spelunky, Games Like The Binding of Isaac
LEAVE A REPLY Cancel Reply