Subway Surfers is a fast paced endless running experience that will have you running across the railway tracks and even on top of trains to avoid the guard and his dog that are close on your tail. It’s a brightly coloured adventure that has you relying on faster reactions and forethought to ensure you are well positioned to overcome the randomly generated and complex levels. 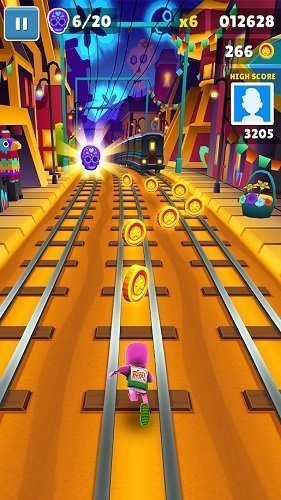 Subway Surfers masters all the basic mechanics that defines an endless running game ensuring that your mobile experience is of high production value across the board, although this does come at the cost of innovation. You’ll get crisp graphics, highly responsive controls, a wealth of boosts and the fantastic aforementioned randomisation to keep you on your toes as you reach ever increasing distances and high scores. For those that are competitively included you’ll get to connect these scores with your friends and compare who is the ultimate subway surfer.

The other supporting core game mechanics in Subway Surfer aren’t anything you haven’t seen before either with players swiping left and right to move across the three available lanes. Jumping over obstacles or underneath them is also important to reach further distances and show up in increasingly frequency as your distance numbers begin to track higher. Obstacles range from bushes, construction signs and even trains which can block multiple lanes at any time requiring quick finger reactions to avoid collision but also planning to ensure you aren’t cut off without an escape route entirely. 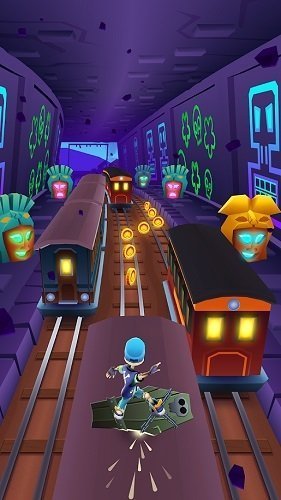 From time to time during a game run players will even have the opportunity to get on top of these trains which creates a dual layered endless runner as you can choose to run along the ground or on top of the trains instead depending on the situation and helps to elevate the repetitiveness that the genre suffers from particularly when a game is one dimensional.

Not shy of offering that sense of progression that all high quality endless runners optimise Subway Surfers has a wealth of thinks to unlock with the coins that you collect single every game run. While you might not be beating your friends or your personal best every run these coins give you a consistent reward for your efforts and let you purchase new characters, upgrades to your various boosts, special mystery boxes and one time use power ups such as the hover board or mega headstart for when you intend to break records. 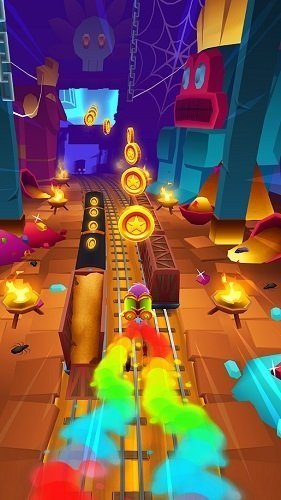 Subway Surfers is definitely one of the more impressive endless running games out there with it’s multiple layer approach to running (ground and on trains) along with the generally high production values throughout. With the huge range of things to unlock and highly responsively controls it’s always a delight to play and a game that is bound to keep you hooked longer than most other options in the genre.

Games Finder is a Steam Curator and featured in the aggregate review scores data of MobyGames and Neoseeker.
FEATURED ON
Games Like Temple Run
LEAVE A REPLY Cancel Reply