Imagine if Mario had randomised levels and you have Super Androix a game with simple presentation that offers challenging platform gameplay for Android that never grows old. Exclusive to Android Super Androix is a simple free title that is intended to be played over short game bursts as you guide your large green, blue and pink blob man through levels by jumping and running over platforms and enemies.

Super Androix is not shy about hiding it’s Mario inspiration with mechanics that anyone that has played a Mario game will recognise and also shortens the overall learning curve for Android platform gamers with similar rulesets, controls and world designs.

Just like the games it takes inspiration from your Super Androix journey starts in the overworld where you can select your next level with the occasional fork in the road. While each of these levels are randomised you’ll find recurring biomes and themes throughout each playthrough that still give you that sense of progression across a total of 8 worlds and over 80 individual levels. 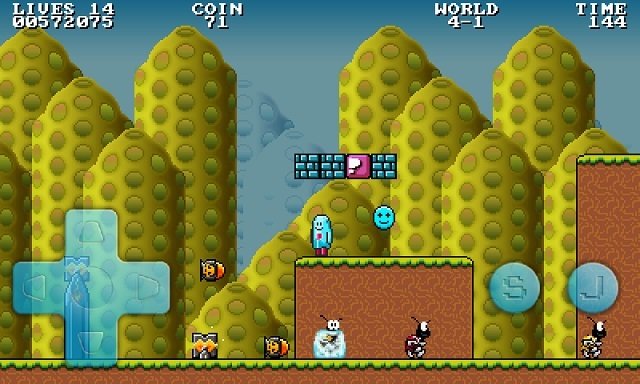 Within each level a variety of stone, cave and open levels await players where they’ll move their green (with no power ups) character from level start to end. Along the way you’ll acquire power ups to give you extra durability, the ability to shoot fireballs, iceballs and a temporary shield that adds a bit more variety to the original platformers that the game is heavily based on.

All of this will help you counter enemies which include very recognisable designs, including a ladybug with a shell that can be picked up and used to dispatch extra enemies. Boss battles are more creative though and can be quite challenging for the first few encounters further providing a sense of progression along the way. 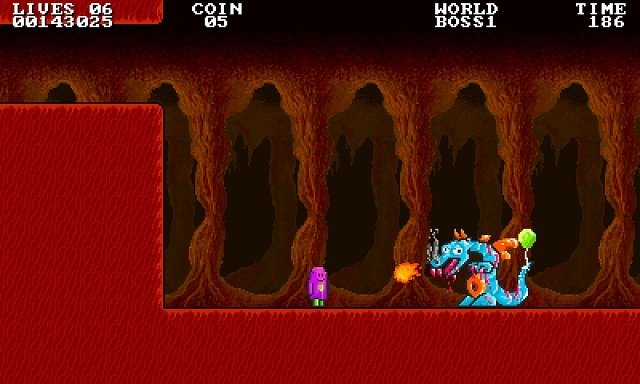 Other mechanics within Super Androix include long range jumps (while running) and hidden power ups within seemingly simple blocks, although the developer assures you that you won’t find any hidden pipes. Players will also get additional lives after collecting 100 game coins, a mechanic often used by such platform titles with collecting elements and can ensure you stay topped up on lives and provide that little bit of a reward for adventuring out of your way for coin collection.

If all of that wasn’t enough players can also compete on the in game worldwide leaderboards to prove they are the master platform gamer capable of adapting to anything the randomised elements of Super Androix can throw at them. While the visuals of Super Androix are basic at first glance the solid platforming mechanics, randomised levels and free price tag make it a perfect activity to pass time and popular in the Android platforming scene.

This review was first published on October 3, 2013. Read our update policy to learn more.