Super World Adventures lets you command the young lumberjack Ritchie who has his lunch stolen by a wild boar. Chasing him through the forest you’ll jump, throw acorns and tackle a dozen bosses on your way to get it back. 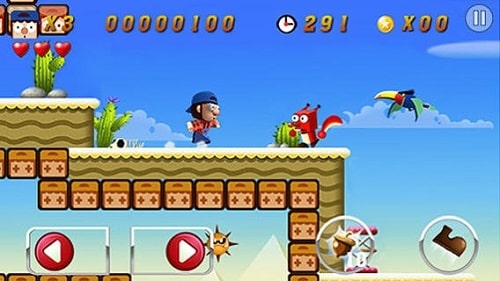 Available for iOS only Super World Adventures throws players right into the overworld at level 1-1 which introduces to the basic game mechanics. If you’ve played any sort of platform game you’ll recognise these instantly with blocks that can be destroyed with headbutts, enemies to stomp on and coins to collect.

Ritchie doesn’t have to rely solely on jumping though with acorns that can be fired at enemies although their curved flight path makes them difficult to use effectively.

You’ll find this a common theme in Super World Adventures with controls that never feel quite as responsive as you like making the game no where near as fluid as the original Mario or the many other Mario clones for mobile. You’ll find it difficult to land your jump exactly as you want or quickly change directions mid jump which make the more difficult levels more painful than fun. 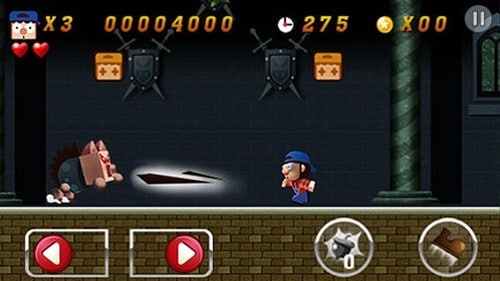 The great level design helps take some attention away from the mediocre controls with often multiple paths (high or low) to explore for maximum coins. By collecting 100 of these golden tokens you’ll be awarded an extra life which always comes in handy. These optional pathways also hide peaches which give you an extra collectable to find in each level. Ultimately you’ll explore 6 unique landscapes with over 30 levels while defeating a dozen bosses along the way.

Super World Adventures is a decent Super Mario clone with plenty of level design variety although is let down by its weak controls which are central to a fluid platform experience.

This review was first published on October 3, 2013. Read our update policy to learn more.