Supreme Commander is a real time strategy title that was been born out of the success of Total Annihilation, an exceedingly popular 1997 strategy game. Centred around mechanical units known as Armoured Command Units (ACU) it’s a futuristic war like adventure. 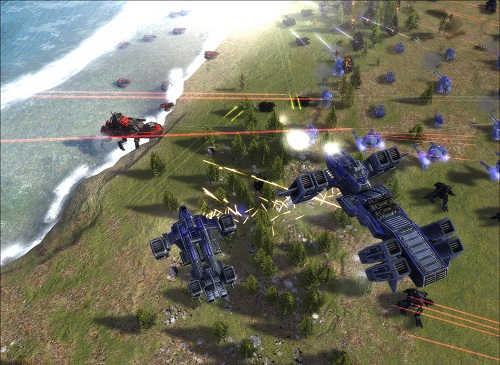 In this future setting humanity has also reached a point of space travel which makes it possible to jump across the galaxy quickly through an invention known as the quantum gateway. With the ability to travel the stars the United Earth Empire began to crumble which has created 3 distinct factions.

This infinite war is central to the single player campaign with each faction having their own external and internal issues. At the core of this adventure is the development of a new powerful weapon called the Black Sun which is capable of wiping out planets in a single shot. This planet destroyer has other uses though and the faction who ends up with it in their hands will be able to achieve their ultimate objective, a choice that is up to players.

In total the campaign has 18 missions, although this equals only 6 for each faction, so you’ll want to explore each of their stories to get your dollars worth. Missions are typically much larger than similar titles with multiple objectives for players to achieve. In each of these factions players assume the role of an inexperienced commander for their faction.

Each mission generally starts with players only possessing a single ACU the loss of which will result in defeat. From this starting unit a number of units and structures can be created which are defined by four technology levels, with each tier offering more efficiency and strength than the previous tier. These four tiers alter gameplay as players grow from weak level 1 units to powerful experimental technology that hides deep within level 4.

In order to build any of these units though you’ll need to manage your two resources of mass and energy. Energy is fairly plentiful and generated by power generators that are constructed by the player. Meanwhile mass must be collected from certain map locations or created by converting energy into mass. 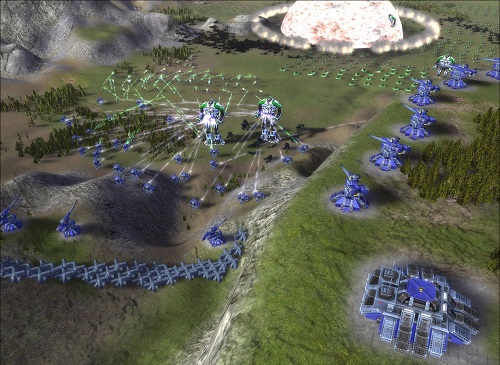 All of this comes together on massive maps which uses a strategic zoom mechanic to help players to navigate the massive maps. This focus on size is not limited to the map either with the higher tier units being massive in size in comparison to tier 1 units and even able to kill them simply by stopping on them.

For large scale futuristic warfare strategy there are few games that can stand up to Supreme Commander.