Clicker and idle style games are dominating the mobile market on both iOS and Android in recent years and while Tap Titans is one in a sea of many it opts to add in some light RPG mechanics into the mix to ensure it’s super addicting despite the simple core gameplay. Ideal for the bite sized gameplay session as you check in on your recruited titans, offer them clicking assistance for a boss and spending your hard earned currency the formula of Tap Titans will feel familiar to many. 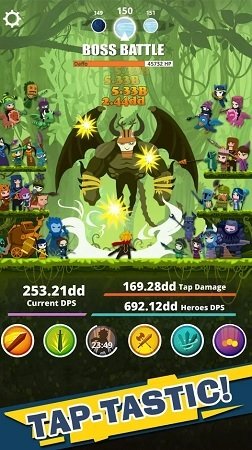 Adopting the same never ending cycle that the genre is known for you’ll find endless upgrades, enhancements and resets available to you which keep your mobile adventure going for hours of game time and potentially months of idle progress.

Starting out with a simple and weak hero players will fight off waves of enemies and defeat powerful bosses to advance through a variety of environments and enemy types to more taptastic gameplay while upgrading their hero and eventually heroes. Tapping on your device will instruct your hero to take a single swing of his sword which can be upgraded to deliver more deadly blows with the gold you’ll collect from slain enemies and is useful for those that want some active element of gameplay. 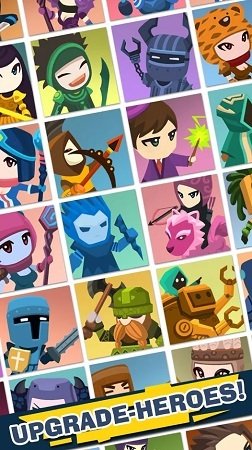 Tap Titans offers another path for players to take though through the hero system that lets you recruit heroes to your party to do the fighting for you in an idle fashion. With these heroes having a great range of passive skills and the fact that they will farm for you while you aren’t playing makes this a particularly attractive way to get far into the game without tapping too extensively and ultimately where your end game progress will come from with the occasional check in and optimisation.

These hero skills unlock at certain level milestones (purchased with gold) and can boost the individual heroes damage, improve the amount of gold that drops, increase your tap damage and much more depending on the theme of the hero who also come with their own unique visual designs that encourage players to collect them all. For those that like to be strategic in their approach to clicker games this system works perfectly as you decide where to spend your hard earned gold and its where you can get ahead of a player that opts for a lazy unoptimised approach as is the case for most titles in this genre. With a range of your own special skills on your main hero also vying for this limited gold pool there is lots of choices in Tap Titans for the iOS and Android gamer. 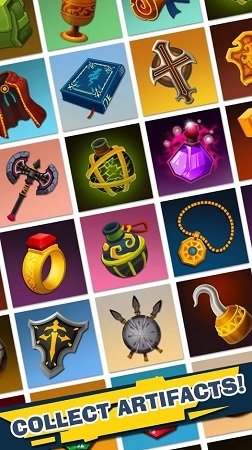 For the truly dedicated Titan tapper you’ll also have artifacts that unlock at level 80 which work on a prestige style system that sends you back to the start of the game except with a shiny new powerful relic that impacts the core gameplay in a number of ways to enhance efficiency of your adventure. Overall Tap Titans is a great addition to the tap based genre with more depth and choice than most, if you’re hooked on this sort of game genre that is.

This review was first published on June 20, 2015. Read our update policy to learn more.