Tap, tap and tap some more in Taps to Riches a title for iOS and Android that is all about idling your way to a small fortune. Following a familiar formula of tapping to generate resources, upgrades and advisors to help boost your revenue even further Taps to Riches joins a long list of idle mobile titles. 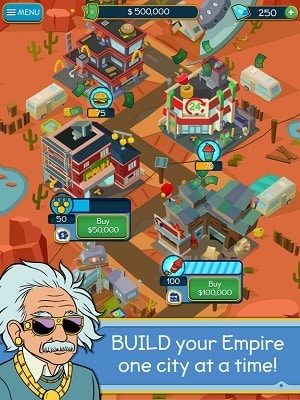 Guided by an intelligent monkey you’ll embark on the taptastic tutorial that has you buying businesses in order to take over the world through legitimate means. Your first such business is the Firework Foundry, capable of producing $5 every second and $10 once upgraded. This won’t be your only business for long though as you quickly acquire your first pawnbrokers and the local quick mart. Players can also tap on their home to earn cash which scales with your upgrades in that city.

As you would expect to see in the genre each of these becomes more expensive and can be constantly upgraded to produce more money with certain milestone levels (such as 25 or 50) giving a large speed boost to the upgraded building. Milestones also alter the visual appearance of your building which is a nice little touch to the cosmetics. This combines well with the different cities (each containing 4 businesses) to give a great sense of progress as you work your way from Dust Valley to the Moto City and the expensive tastes of Capitalist Hill (at a hefty $375 billion for a house).

The encouragement to tap forward doesn’t stop there though with a healthy dose of achievements that reward premium game currency and advisors (over 100) to collect that each offer there own unique modifier. This includes things like boosting the amount of money you earn per tap, critical tap chances and extra speed on certain businesses. 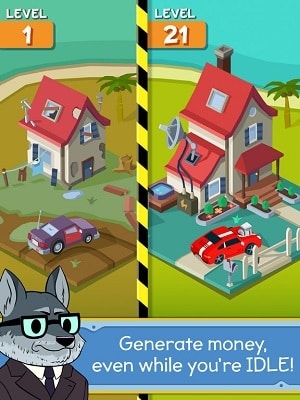 Further down the line you’ll also get daily quests and bizbots to make even more funds. Taps to Riches also works in temporary business boosts that can improve profits for a short period of time and occurr randomly throughout the game along with the option do double their impact by watching a short video, a fairly standard approach for this sort of game.

Taps to Riches is a strong entrant in the idle mobile genre and not only gets many core mechanics right it does most of them exceptionally well.

Games Finder is a Steam Curator and featured in the aggregate review scores data of MobyGames and Neoseeker.
FEATURED ON
Games Like Adventure Capitalist, Games Like Cookie Clicker
1 COMMENTS
LEAVE A REPLY Cancel Reply