Temple Run 2 builds on the foundations of the original Temple Run to offer new upgrades along with a more difficult adventure to once again capture the attention of endless running addicts. Released in 2013 (2 years after the original) this experience is definitely suited to the more veteran players in the genre who are seeking a challenge while wanting the familiar formula they mastered in one of the very first in the genre, being the original Temple Run. 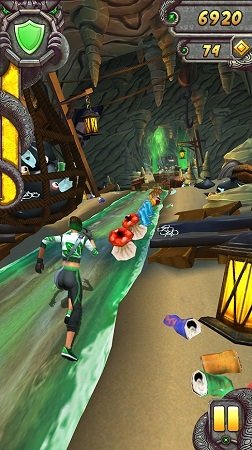 This is definitely the case as core gameplay in Temple Run 2 has changed little from 2 years ago with players controlling their character in a similar manner to before with a combination of tilt and swipe controls to overcome a range of obstacles. That being said Temple Run 2 does play at a faster pace though and throws significantly more obstacles at players which make your fast reflexes even more important than before.

The setting is not entirely a replication either and is one of the big changes in Temple Run 2 with exciting new environments to run through which include ziplines, mine tracks and rivers to keep gameplay more interesting and varied in comparison to the first Temple Run experience that seems bare bones in comparison (although wasn’t for the time). 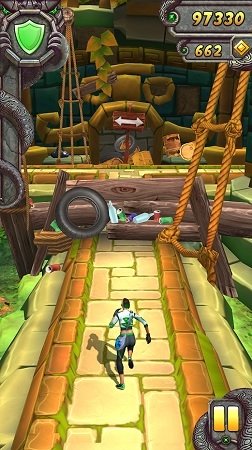 Guy Dangerous will still be your main character but Temple Run 2 does introduce new characters for players to unlock with the coins that they collect and provide some progression elements. Each of these characters allow you to unlock a new powerup which will help you achieve greater distances such as the shield, speed boost and coin magnet. These powerups can either be found randomly during game run or activated instantly once you collect enough coins to fill up your power bar on the side of the screen which does give you that extra incentive to try and collect as many coins as possible rather than opting solely for safe survival gameplay.

Abilities are still a key factor in your attempts to progress the further distances in the game and allow you to upgrade a wide range of game elements. Players can upgrade coin values, powerup duration, the rate that the special powerups appear and how quickly the power bar fills up when collecting coins. All up there are 11 ability upgrades which each come with 5 levels so there is always something to spend coins on and on top of the character unlocks means you’ll always have a goal in mind. 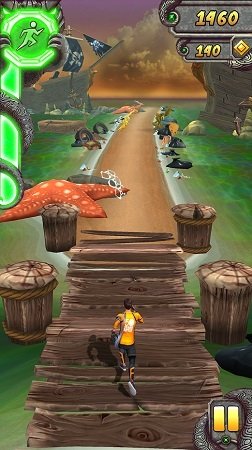 The harder difficulty of Temple Run 2, better environment variety and additional upgrades make it well worth playing if you found yourself hooked on the original or simply as your first step into the genre. The game doesn’t try to do anything innovative though and in a space where a number of games are now improving on the original Temple Run formula Temple Run 2 just feels a little weak in comparison almost playing it too safe.

Games Finder is a Steam Curator and featured in the aggregate review scores data of MobyGames and Neoseeker.
FEATURED ON
Games Like Subway Surfers
LEAVE A REPLY Cancel Reply