Temple Run is one of the original endless running games, utilising jumps, slides, swipes and tilt mechanics players will have to escape from the demonic monkeys with your stolen rare idol from your temple adventure. It’s an addictive experience for iOS and Android which is often credited as popularising a new genre of mobile gaming focused around high score competition with friends and your own personal bests. 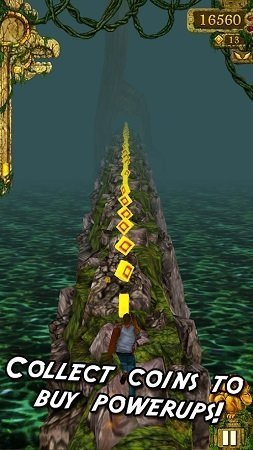 Gameplay in Temple Run is designed with this premise in mind and splits itself into bite size chunks of gameplay that be as short as 30 seconds but eventually grow into several minutes of gameplay as your own skill level improves. Your goal during these time slots though remains the same with an objective to reach as far as possible. This formula thrives on competition with players getting much more from the experience if they have a group of friends to compare against or simply love setting new personal bests and challenging themselves.

Your first run in Temple Run will also serve as your tutorial as you are guided to turn around corners, jump over several obstacles, slide under a large tree and tilt your device to collect coins. Temple Run is one of the few games in the genre (at the time of its release) to combine all of these elements together with the requirement to turn corners (of which there are sometimes two paths) and tilting your device to avoid holes in the path while collecting coins adding a lot to the overall difficultly to the game which keeps it one of the top endless running experiences on the market. This is comparison to other alternatives that rely on a single mechanic rather than integrating them all. 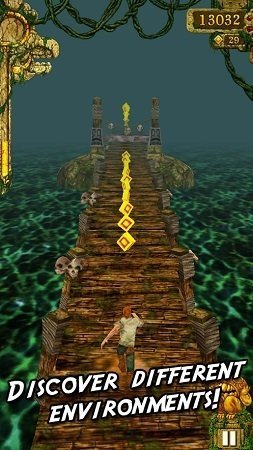 To help you counter this difficultly level Temple Run gives you a number of powers that must be unlocked and then upgraded with the coins that you collect during these individual runs. Not only do these make it increasingly easier to reach the highest distances that Temple Run offers but it also provides an underlying sense of progression that can be lacking as you continually engage in short attempts as a new player. These include powerups that you’ll randomly encounter in each game from the mega coin that gives you a massive coin boost to them coin magnet or the invisibility power that lets you pass through obstacles for a temporary amount of time.

Coins can also be spent on one time utilities that will revive you after death or let you start thousands of metres from the start of the game to save time overall and allow more opportunities to shoot for the top tier of distances. For the real dedicated temple runners players will be able to spend their hard earned coins on new characters or wallpapers which again add a sense of progression layer. 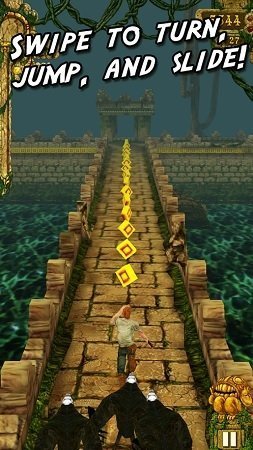 If you are looking to return to the roots of a now widespread genre or seeking a game that requires a little more contribution from your part to achieve long distances then Temple Run deserves some space on your mobile device.

Games Finder is a Steam Curator and featured in the aggregate review scores data of MobyGames and Neoseeker.
FEATURED ON
Games Like Subway Surfers
LEAVE A REPLY Cancel Reply