With its unique Mayan skin Tentlan stands out amongst the sea of other free to play MMO strategy titles that live in the browser landscape. While the fundamentals of core gameplay offer a similar build, fight and expand mentality to other titles in the genre it feels fresh as you command your own Mayan civilisation through trials of economy and war. 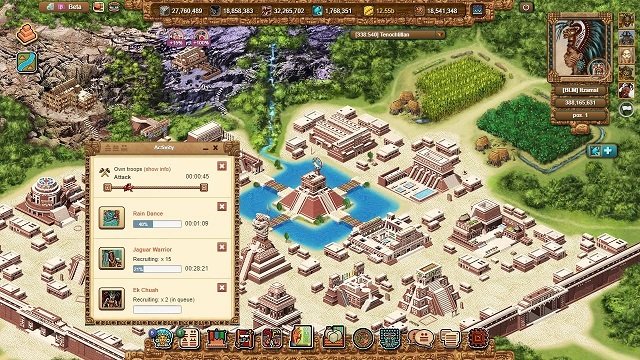 Set deep in the rainforest players are greeted with their own historical landscape where they can build up their empire one brick at a time. Serving as the royal Ahau you’ll meet Itzel who informs you there is no time to lose in constructing a mighty empire as danger is forever present. The heart of this empire and first building that you’ll construct is the Sun Temple which serves as the pillar of your Mayan based society. Just like the ancient Aztec city of Tenochtitlan that was built on an island Tentlan offers you a similar experience.

Passing on the traditional MMO strategy title resources Tentlan utilises a six resource mechanic which includes the vital limestone obtained from the quarry and is the base of any construction for your civilisation. When paired with the obsidian from the local mine though you’ll find your buildings highly resistant to attacks and can also be used to craft your own weapons of war.

In addition to these mining based construction materials players must harvest cacao, corn and the rare turquoise to grant access to all buildings and technologies that Tentlan has to offer. The final sixth resource and arguably the most important is your population which also must be managed carefully and optimised for working. Increasing your population resource is closely linked with your Sun Temple which boosts the population growth rate and increases the maximum potential population although you’ll need the necessary corn income to ensure population food consumption is stable. 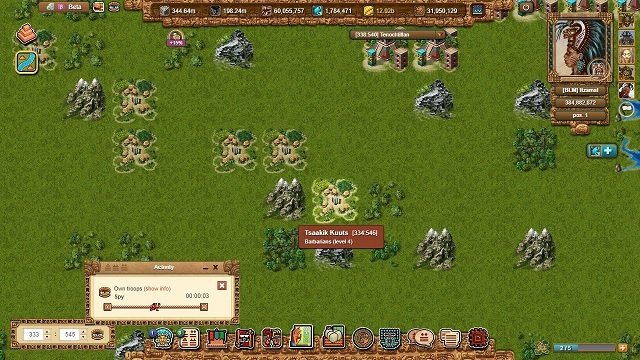 Tentlan offers nearly two dozen buildings that you’ll be able to construct across your sprawling landscape with impressive and distinct designs ensuring you can recognise each building from afar. Unfortunately though the location of each of these is fixed taking away any room for empire customisation from the player.

Unlocking each of these buildings is closely linked to the observatory which serves as the research hub for Tentlan players while also providing small but useful boosts to various game mechanics. Nature for example can increase the movement speed of your troops and is also key to unlocking later technologies and buildings to continue the expansion of your empire. Agriculture is the first such pillar technology for later construction by unlocking the ability to build a cacao plantation and the corn farm to fuel your growing kingdom.

The interconnected nature of mechanics in Tentlan is by far its best design element and encourages you to find that perfect balance and upgrade path for your intended strategy. It is also leaves plenty of strategic advantage for those that upgrade and plan wisely as opposed to those that just take every single upgrade without consideration of efficiency and how it all fits together more broadly. This also extends to supporting mechanics like season changing rituals and unit strengths to further support a strategic focus. 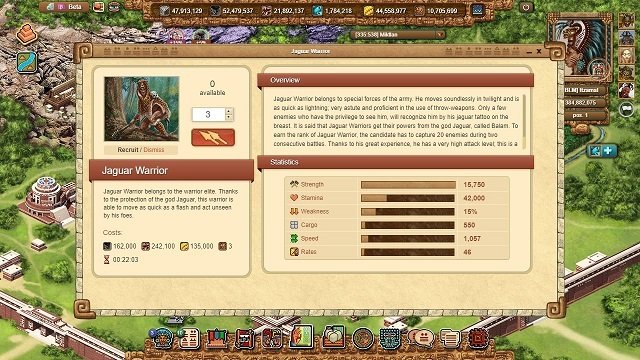 This leads you towards the ultimate objective which is either the individual campaign, co-operative adventures or the deadly competitive environment

As far as free to play strategy titles go Tentlan has cemented itself as focusing on strategic options and upgrade pathing in comparison to its competitors. The unique Mayan theme also helps it stand out with no other games on the market opting to explore this key historical period.

This review was first published on October 5, 2020. Read our update policy to learn more.