The Milky Way Defender offers a high quality tower defence experience for your iOS device. Protect your cows from the invading aliens across multiple worlds with carefully devised strategy. It’s a game pack full of tower defence features to ensure any veteran of the genre is well looked after. 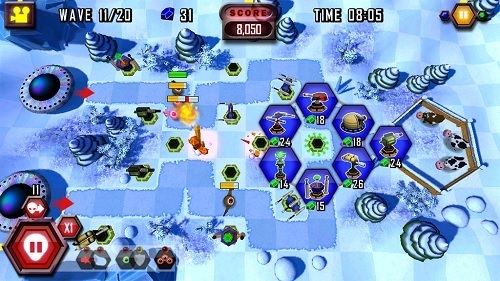 In terms of game mechanics The Milky Way Defender is exactly what you would expect. On one side of the screen you’ll have aliens (known as eyeliens) coming out of their space ship to capture your delicious cows which they’ll teleport away with if they reach the end of the path. Along this path you’ll have a number of pedestals where you can build defensive structures that each serve their own purpose in your overall defence strategy (extras such as mines that can be placed directly on a path also become available a few levels in).

All the other standard tower defence elements are also present with the ability to call in waves early, speed up the game and upgrade towers from their basic form.

One particularly interesting feature though is the timeline bar at the bottom of the screen which shows the upcoming waves of enemies and their difficulty compared to it’s last appearance. This helps you plan more effectively for future waves and definitely comes in handy during the later more difficult levels.

Where the magic really happens in The Milky Way Defender though is outside the core gameplay where you have a wealth of extras to keep you forever interested. From the detailed encyclopedia to keep track of all your turrets and the enemies you encounter to badge collecting for completing certain level requirements and a level system for upgrading towers as you see fit. As if that wasn’t enough you’ll also be able to spend game coins that you earn for playing to unlock additional challenges. 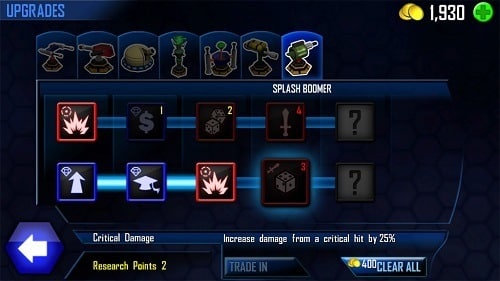 While the price might seem high at first glance you will be getting your money’s worth in The Milky Way Defender especially if you’re a perfectionist interested in collecting every single badge for each level. If you’re a play through each level only once sort of player though you’ll probably be pushing it in terms of value.

Overall the game gets the basics of the genre down well and then excels in all the extras that it offers, The Milky Way Defender is a definite must add to any tower defence collection.