From the same brain that brought you the popular Papers, Please title, The Republia Times was created nearly 2 years earlier. With a similar style and theme you’ll step into the role of editor-in-chief and choose the articles that will appear in the daily paper. 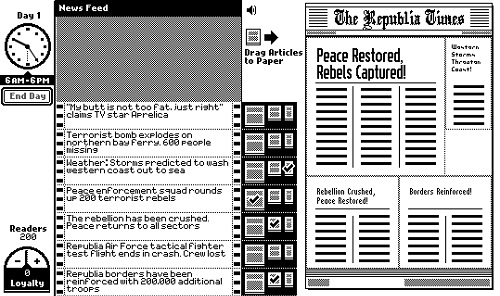 Set in the nation of Republia the game takes place just after the war with neighbouring Antegria and the crushing of rebel forces that attempted to rise up against the government. The public though is still uneasy about their leaders and your paper can tilt the public’s loyalty in the direction that you choose.

To make your decision more difficult players will find that their wife and child are being held by the government, at which point you’re given your first task to raise the public loyalty to 20 within 3 days.

Each day lasts from 6AM-6PM (just over a minute in real time) and involves a number of article headlines appearing in front of the player. From this list players will select the article they want, along with the applicable size of the article by dragging it onto their newspaper front page. Larger articles have a greater influence on the loyalty of your readers which can be used to shift loyalty quickly. 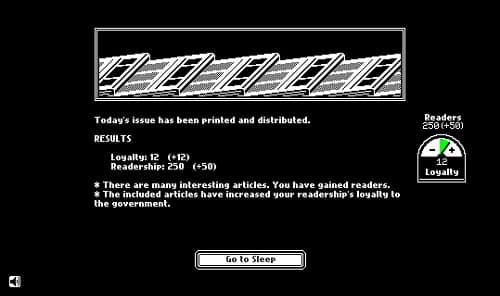 Just talking about political activities is of course very dull though so in order to expand your readership players will need to report on things such as sports, entertainment, military matters and the weather. This creates an interesting balance where players want to both grow their readership and alter the loyalty of the public within the time frame they have.

Ultimately players can direct reader loyalty to either the government or the rebels which alters the game ending. While neither will be spoilt here, they are both indeed thought provoking.