The Westport Independent is a unique simulation title about censorship, corruption and the newspaper. Playing as the editor in one of the few remaining independent newspapers in the country you’ll be faced with a number of decisions as to how you present the government to your readers, for better or for worse while dealing with the associated consequences of those actions.

The game kicks off the with Loyalist Party being elected into power and sending out a bulletin regarding the Public Culture Bill which is due out in 12 weeks from the game start date. When this bill goes live your independence will be lost as a requirement of the bill is the joining of the Loyalist News and Media Association or opt to shut down giving the party complete control over the news of the nation. 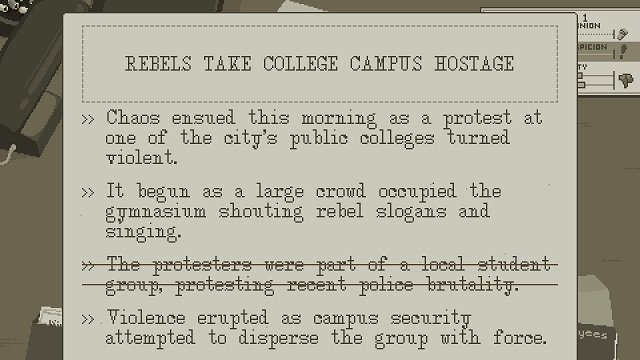 In the interim the editor has received very specific instructions about what not to publish in order to avoid the wraith of the new government. This list includes not printing content that would harm the appearance of the country, government or president while also avoiding the glorification of any rebel actions that have taken place since the election of the new government. It’s a dark oppressive setting that The Westport Independent establishes and provides the framework for the core mechanic to gameplay.

The primary mechanic in The Westport Independent is the censoring of articles and altering headlines that cross your work desk to please the new government or go promote the rebels in careful ways to maintain your job. At the same time you’ll have to manage employees who will transcribe your decisions although some will not wish to risk their life by publishing a potential article that goes against the interim guidance from the loyalist political group. 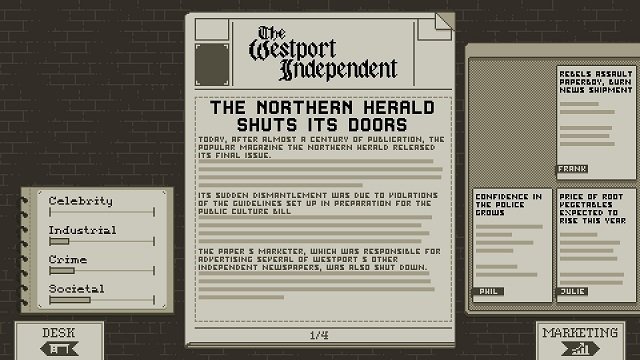 All of this takes place on your desk and using a similar mechanic to Papers, Please has players dragging pieces of paper and other items onto their desk for reading. Split into 12 separate weeks players will need to review articles for that week and alter the content as they see fit, which in turn can alter public opinion for a preferred ending. Articles offer a wide range of subjects although the majority link back to the growing rebellion at the recent election so expect to see news on riots or failures of the new party to provide healthcare or other vital funding.

Once players have selected how they wish to present the articles they can send them off to their team which will then end the week. At this point players will get reports around their weekly paper sales, the people’s opinion (loyalist or rebels) and the loyalist’s suspicion of you (if any) and the change in these numbers since the previous week. Not only do players need to make decisions on the edits but also the articles in general with players often being provided more articles than they do staff resulting in some not making the paper entirely. 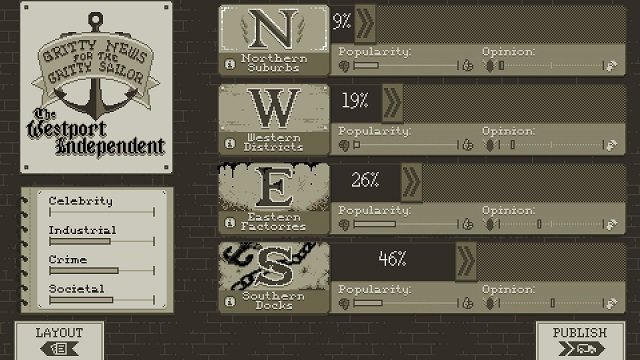 In addition The Westport Independent evolves the gameplay slowly to include the arrangement of the paper and your marketing budget which ties into the four game suburbs which have different article preferences (split between celebrity, industrial, crime and societal). While not the primary focus of the game this adds an enjoyable management touch to build the realism of your newspaper role.

Overall The Westport Independent is a fun title that explores the interesting element of censorship and the little opportunities to break out of the oppression. Mechanically the game is strong although the amount of depth, connection and replay opportunities don’t quite reach the peaks of similar titles.