Theme Hospital is another gaming classic developed by Bullfrog Productions and puts you at the head of controlling your own hospital with a twist of humour. The game originally launched in 1997 for Windows and Mac eventually making its way to the PlayStation, it is still available through the PlayStation Store for PS3, PSP and PS Vita. 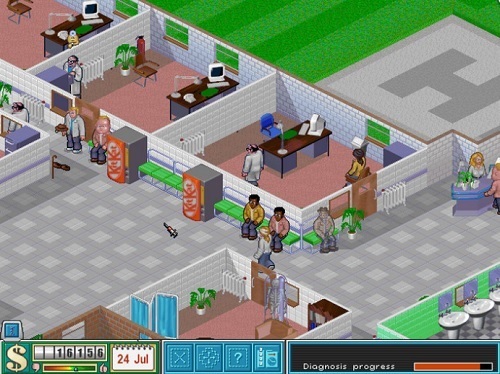 Theme Hospital takes place within a hospital that players build themselves using a variety of room types and objects. Once you’ve setup your hospital you will attract patients that come to the hospital with strange illnesses and diseases. Just like in other simulation games players don’t directly influence the game world or control the doctors but instead focus on providing the necessary rooms, staff and objects that a hospital needs to operate properly.

Players are able to pick up their staff to direct them to where they are needed or speed up their travel time. In a cruel twist of fate players can even expel patients in their hospital if they are being difficult or simply expel them so they don’t die within the hospital (which impacts your reputation). Players can also force medicine on patients with a certain chance of success. 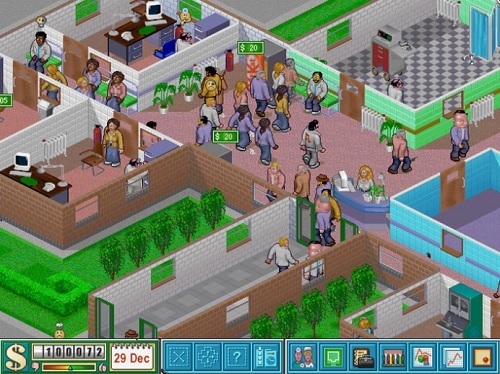 Much of the building in Theme Hospital happens before the actual game starts with players given plenty of time to build their rooms and hire staff before accepting patients. Players are free to set their room sizes although rooms have certain size requirements to operate (and fit objects). Once you’ve got the necessary rooms patients are attracted based on your reputation and your expenses for treatment.

Levels are split into different scenarios with their own challenges or time restrictions which require players to alter their strategy throughout the game. If you haven’t played this classic yet it should definitely be added to your must play list.