Threes! comes from a small team of indie developers with its original release on the iOS platform. One of the first games of with such as sliding and number mechanics Threes! was broadly considered an addictive success leading to a number of spin-off titles and eventually led to the game being ported to Android, Xbox One, Windows Phone and even playable directly in your browser. 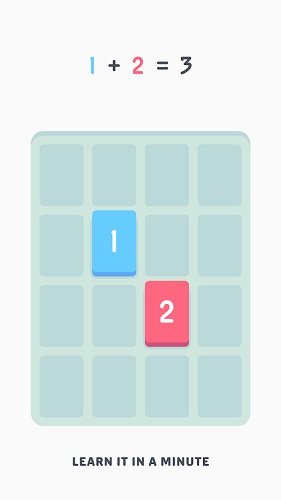 The basic premise of Threes! has players sliding groups of numbers on the four by four grid to make number matches based on multiples of threes. Ultimately you’ll be attempting to achieve the highest score possible for bragging rights to friends or for the truly masterful gamer achieving the game ending 12,288 tile worth a monstrous 1,594,323 points.

The base of all your game tiles though is the important 1 and 2 tiles which when combined create your first three and start the cascade of matches to 6, 12, 24 and beyond. All of these matches occur automatically when tiles of the same number are pushed into each other which is accomplished with a single swipe of your finer up, down, left or right. 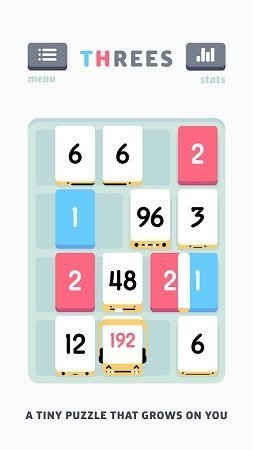 This sliding is Threes! central mechanic and thanks to the lack of imposed time limits one that makes it both accessible and easy to play everywhere. After each slide every single tile on the game board will move in that direction unless it is blocked by another tile or the wall. Understanding which tiles will not move though because of an obstruction is vital as tiles of the same number (or a 1 and 2) will merge when pushed into each other.

On the surface these mechanics are simple to learn but planning several moves ahead can take some serious practice and unique thinking. The difficulty of the game comes from the fact that each swipe will add another base number to the game board and quickly fill up the available space which can lead to a game ending scenario and vital to manage. Once there are no available moves the game ends and points are awarded based on the numbers on the board with no points for any remaining base 1 and 2 numbers. 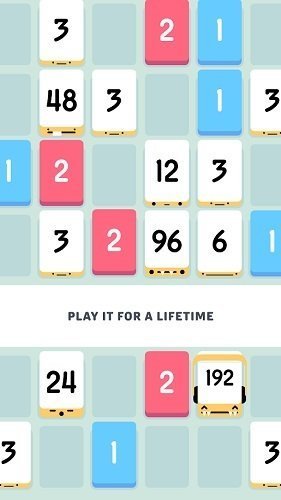 While the game has free versions available players are limited by the number of plays they can have before they’ll need to watch an ad for an additional 3 games. Alternatively the paid versions can give you unlimited numbers of games for a small purchase price (availability depends on platform).

The casual and unique experience of Threes! makes it ideal to play in those 10-20 minutes of time while you wait for something or someone. The legacy of the game also speaks to the success of Threes! with a wealth of replica titles releasing on the respective app stores in response to the viral hit that is Threes!

This review was first published on September 4, 2016. Read our update policy to learn more.

Games Finder is a Steam Curator and featured in the aggregate review scores data of MobyGames and Neoseeker.
FEATURED ON
Games Like 2048
LEAVE A REPLY Cancel Reply