Joining the ranks of social games that revolve around deduction Throne of Lies offers a 3D experience for up to 16 players. Inspiration is taken from the popular games of Werewolf and Mafia that fans of the genre will be familiar with but the level of depth (and enjoyment) offered far exceeds these original titles. 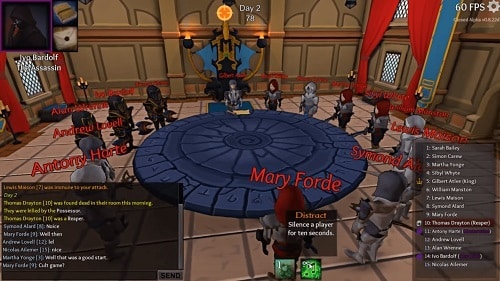 The basic formula of Throne of Lies: The Online Game of Deceit is recognisable from game one with two factions alongside some neutral players each attempting to achieve their own objectives. In Throne of Lies these factions see the Blue Dragon faction matched against either the Unseen or the Cult (advanced players only).

For players assigned to Blue Dragon you won’t be aware of who your allies are but will have to find each other in order to shut out the Unseen or the Cult along with the Neutral classes that have a killing based win condition. Meanwhile the Unseen and Cult are aware of which players are within their faction and have the single objective of defeating Blue Dragon.

To make matters even more interesting each game has a prince loyal to the Blue Dragon and a King with an unknown loyalty (who can be replaced by players if they die). Throne of Lies also includes a conversion mechanic that can quickly add more complexity as players swap factions behind the scenes. The standard execution is also central to the days activities and includes visualised executions.

Core game mechanics aside your best learning tool will be playing games with others which is easy enough to achieve with the reasonable strong launch community (several hundred concurrent players). Matchmaking is fast and also lets players choose a different name for each game alongside changing their visual appearance as you collect in game gold for games played. With each game showing off your character visually in day and night cycles there is definitely some incentive to be had here. 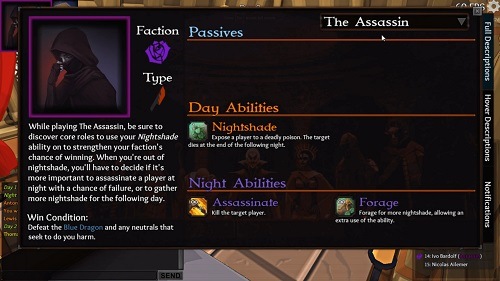 With over 40 classes spread across the factions you won’t be running out of variety anytime soon as you play as and against all sorts of different game combinations. All of this is supported brilliantly with clean UI that clearly displays all important information within a click and thus makes it one of the easier social deduction games to break into. With the price point in consideration as well Throne of Lies definitely achieves value for money.

Overall Throne of Lies is a top notch social deduction title with plenty of design details (big and small) that help it stand out against current options in its niche and help cut down the learning curve as much as practically possible without killing the long term enjoyment.

This review was first published on October 27, 2017. Read our update policy to learn more.

Throne of Lies: The Online Game of Deceit