Breaking down the gameplay of impressive titles such as Dark Souls and Shadow of the Colossus is Titan Souls, a 16-bit style adventure about uncovering the best approach given the situation at hand which generally involves a large and unique boss battle. 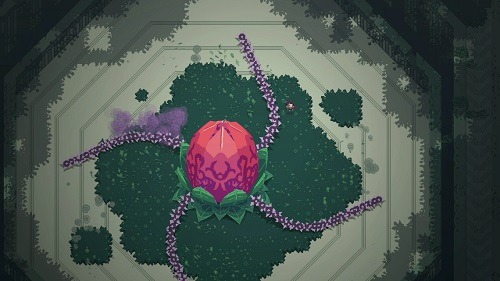 Set between planes of existence you’ll explore the spiritual world that lies between Earth and the world beyond. Within these surroundings lie the titans which lie idle amongst the ruined setting. Playing as a young lone hero armed with only a single magical arrow you’ll embark on your quest to destroy each of these to claim their power shards.

Your ultimate objective is take out each of the titans that lie in wait for you. In order to do so you’ll need to discover each strategy to overcome their unique skillsets and designs.

With no other enemies in your journey the focus is solely on these battles which does hurt replay value as the bulk of the Titan Soul’s appeal is the discovery of the appropriate strategy to counter the given boss. 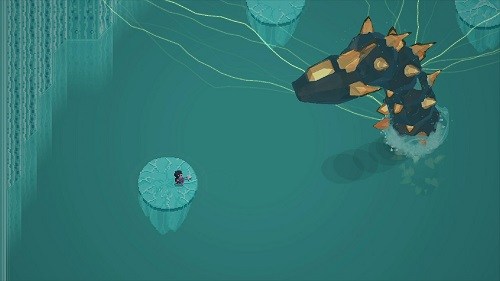 The controls available to achieve this are simple to learn but applying them to maximum effect will still take a little bit of time. For weapon you’ll have your trusty bow and arrow which holds only a single arrow but can be called back after being fired to hit targets twice if required. Additionally players can utilise a roll mechanic which is vital to dodging some of the faster moving attacks that will come your way.

These simple design principles also extend to player health with only a single hit from a titan ending your small hero’s life. Upon death you’ll respawn at your latest defeated titan unless you’re attempting one of the alternate modes (Iron Man Mode) which limits you to one life.

Games Finder is a Steam Curator and featured in the aggregate review scores data of MobyGames and Neoseeker.
FEATURED ON
Games Like Dark Souls, Games Like Shadow of the Colossus
LEAVE A REPLY Cancel Reply