Competitive archery makes a comeback in arena style through TowerFall Ascension. Supporting local play and a single player campaign you’ll command one of up to 4 archers on various maps as you attempt to one shot your opponents. 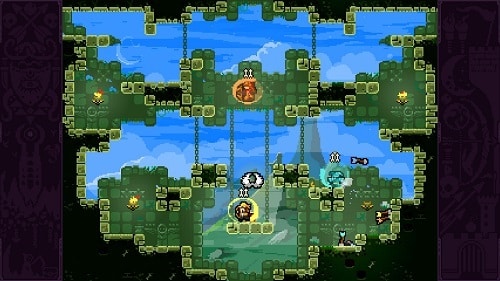 With the lack of online multiplayer TowerFall Ascension is designed for the party game niche and fills this market perfectly with its intensely satisfying combat where each kill feels satisfying and particularly so when your victim is sitting alongside you.

Gameplay of TowerFall Ascension is simple which also ensures a highly balanced experience with all players having access to the same mechanics regardless of their character. This gameplay experience revolves around the bow which each player is armed with. Paired with a limited number of areas players control the direction of their attack as they attempt to hit enemies for a one hit kill.

While you’ll start with only a few arrows every arrow that is fired sticks to the environment and can be picked up by either the shooter or another player, for a maximum of 6 stored at any time. If players find themselves without arrows jumping on an enemies head will also secure a kill. 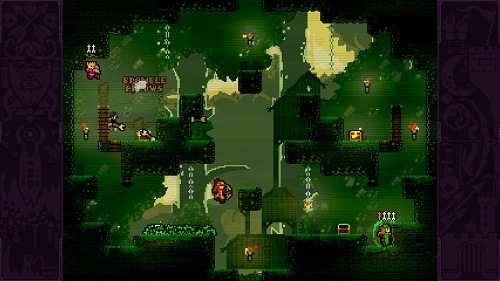 Additionally treasure chests around the map hold special items to help players from extra arrows to a shield that can absorb one hit. Other items can impact on the game environment such as slowing down time or spawning lava on the side of the screens.

Building on this simple design is the games 120 maps that all offer a different layout to master. A common theme among these maps is the ability to fall through gaps in the floor and respawn at the top of the map, allowing players to constantly fight over the high ground.