Tropico 4 stays true to the popular Tropico series formula with an experience that combines city management mechanics alongside political considerations and humour along the way as players attempt to stay in power over the long term. Resulting in an exciting mixture of simulation, construction and management this addition to the franchise developed by Haemimont Games will keep you engaged for hours as you make all manner of decisions and watch the impacts play out. Tropico 4 was originally released in 2011 for Windows with a subsequent Xbox 360 release in the same year and a Mac version in 2013. 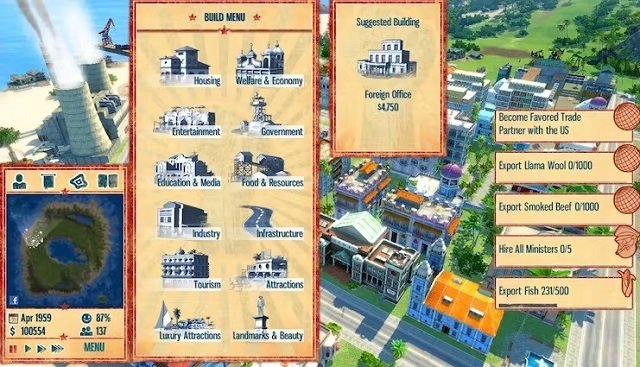 At the heart of your Tropico 4 challenge is the objective to create your own thriving banana republic inspired island nation. At the head of this nation is your customised El Presidente who plays a dictator role for your island paradise. In the campaign this story has players attempting to restore lost power in the Caribbean by starting a new island nation and finding out secret information of a US plot to overthrow them. This will require you to build and abuse as many political connections as possible from your various island nations across the three campaign game acts. El Presidente customisation includes gender, outfit, skin, hair, facial hair and accessories alongside starting traits that can significantly impact gameplay by providing various buffs.

Said campaign is split between 20 campaign missions in the base game with additional content added through the various DLC add-ons. These campaign challenges are spread across 10 structured maps which alter the experience for players regularly and ties into the broader plot story and requires players to regularly rebuild or reach the next level of progression so that each has a different scenario at play. Beyond this campaign a sandbox mode allows players to generate a randomised map that you can progress from start to finish and serves as a final cornerstone challenge for experienced players. This is because in this mode players can tailor the difficulty they experience from island size, mineral resources, vegetation levels and landscape elevation that can have small to large gameplay impacts. 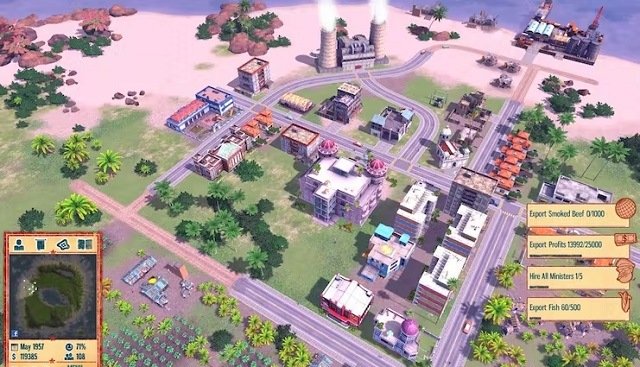 The core gameplay of Tropico 4 is similar to that of Tropico 3 although expands several mechanics including the introduction of imports (previously only exports), a council of ministers to advise your next best action, a greater range of superpower factions to manage and a diverse list of natural disasters that can wreck havoc on your plans. This requires players to ultimately manage the needs of their island citizens which are focused on food, health, leisure and faith which impact on general happiness. If players can’t keep needs and in turn happiness at acceptable levels you’ll quickly be unable to progress your island nation or at the extreme become overthrown at the next election which ends your game.

At a basic level this requires players to manage their available resources to construct suitable buildings across attractions, education, entertainment, food, government, housing, industry, infrastructure, landmarks, luxury, tourism and welfare. The majority of which have an upfront cost to manage, a recurring up keep cost and a certain number of employees to operate that requires a careful balance of resource generation and usage to ensure steady growth. 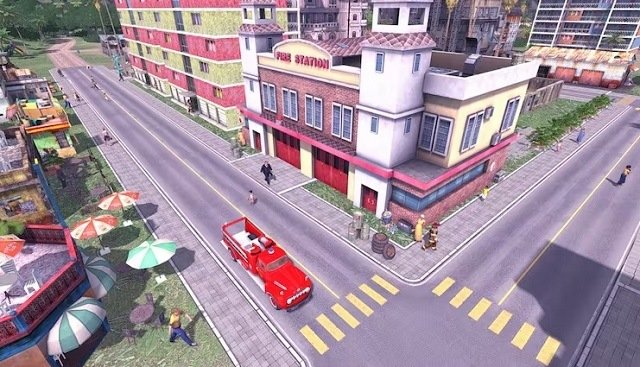 In the background you’ll also have to manage the 8 island factions that each have their own agenda and create an almost impossible balancing act as you try to please both the Intellectuals and the Religious factions that have opposing political demands. Many of these centre around the game edicts which are the laws or actions that El Presidente puts in place that have their own unique trade offs.

The result is a Tropico 4 experience that isn’t a straight city builder and has more micro economic management required than traditional city building titles but also a greater level of depth as a result.