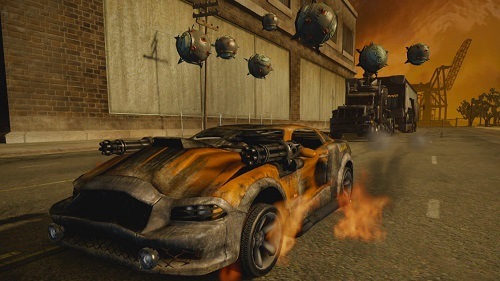 Just like the first game central to your story is the Twisted Metal competition run by Calypso, a man who has been sent back to Earth from Hell with the ability to grant wishes provided he hosts the tournament and collects the souls of the demolition drivers. Playing as 3 such drivers (Sweet Teeth, Daniel Grimm and Doll Face) during the campaign story arcs you’ll quest for your own wish. Each arc ends with boss battle while also increasing the difficultly and introducing new challenges along the way.

Each of these story arcs and online gameplay revolves heavily around intense vehicle combat that has you ramming and shooting at the equally well armoured cars of other factions or players. To achieve this you’ve got 17 unique vehicles at your disposal with varying weapons and degrees of speed to suit your intended game style. These vehicle based weapons are also extremely deadly against the surrounding environment. 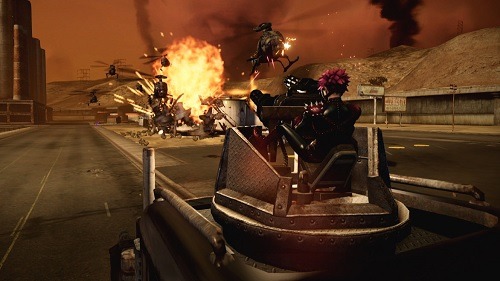 Twisted Metal is more than just pointing your car at enemy and firing though with some strategy around the likes of power ups that will litter the map and need to be factored in. Some of the more unique special abilities on cars also require careful forethought for maximum impact. Expect to see things like missiles, mines, sniper rifles, freezing attacks and even the odd defensive option like shields thrown into the mix.

The only downside of Twisted Metal lies within the controls that will take you a while to master and the shortish feel of the campaign which can be knocked off in less than a day. With the online community long gone for this game that means you’ll miss out on a chunk of the intended play time unless you can find some friends to join you.

Games Finder is a Steam Curator and featured in the aggregate review scores data of MobyGames and Neoseeker.
FEATURED ON
Games Like Mad Max, Games Like Rocket League
LEAVE A REPLY Cancel Reply