Ultimate Chicken Horse is a party platformer title that lets you challenge your friends to reaching the finish line first in a deadly environment of traps. In addition to the competitive gameplay players can also create their own game levels to create new personalised challenges for yourself, friends and others in the community. Chicken Horse supports up to 4 players online or through local play. 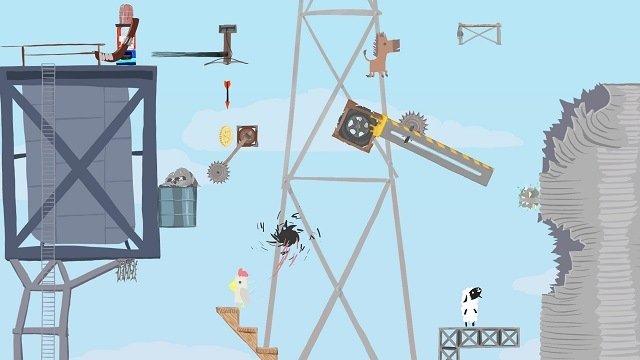 While your core objective in Ultimate Chicken Horse remains the same in every match the wealth of level creation tools, available maps and the decisions you make during a game ensure each friendly challenge is a different adventure. Central to this is the platform mechanics of the game where players will jump between platforms or off walls while dodging every sort of trap imaginable on the path to the end zone marked by a flag before your friends can. What separates Ultimate Chicken Ultimate from similar games is that the stage will change each turn as players add their own traps to map before having their turn.

While a simple objective on the outside this is made anything but simple due to the number of obstacles and traps that litter the map and can be deadly to your animal avatar. Should you reach the end point you’ll earn points with bonuses for being the first player to do so, making comebacks, killing a player with one of your placed trapped or collecting a coin on the game map. While this is the core mode known as party mode there is also a creative, challenge and free play mode which help build up your game knowledge. 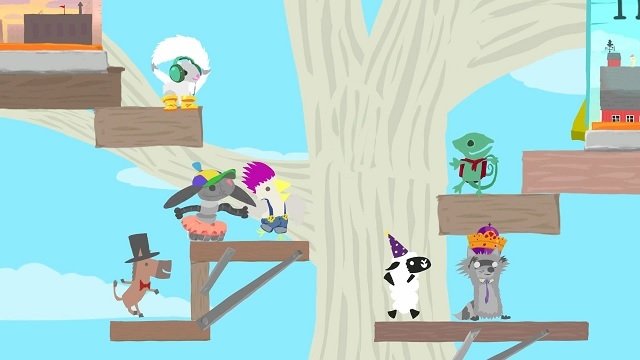 This game knowledge is key to your eventual success with Ultimate Chicken Horse having dozens of potential jump variations to master that impact on how far or high you reach and combines closely with the ability to wall jump off objects. Depending on the environment players can also be pushed by objects or slide horizontal and vertically. Each of these aspects can be further modified through physics or fun modifiers to impact the game gravity, speed, jump strength, invisibility or even enable a jetpack mode.

Where the complexity and real fun of Ultimate Chicken Horse lies is between earning points the map gets more challenging with new traps and obstacles to overcome placed by the players. With players having to move through the same obstacles its a fine balance of difficultly and playing to your strengths in the game. There are well over two dozen options which are thrown randomly at players so variety isn’t low by any means and each item can always be used in different ways. Some potential trap types include barbed wire, beehives, bombs, saws, boxing gloves, crossbows and conveyer belts. 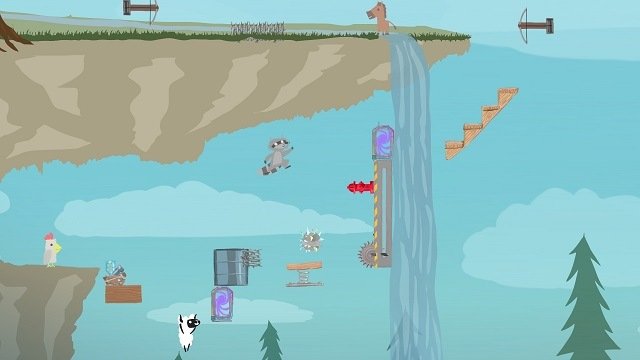 Along the way and to encourage further play Ultimate Chicken Horse has a number of unlockable items that are stored in your game treehouse area. This includes additional animal characters (11 in total) and various additional outfits that see you jumping through the map as a squirrel, raccoon, horse, chicken, bunny, sheep, chameleon, elephant, monkey or snake that are tied to the game host. Core game levels must also be unlocked from the initial starting 2 with a total of 18 that take players from rooftops to an old mansion, a pyramid, waterfall, pier, volcano and even space to name a few.

As you can imagine all of the above makes for a different experience depending on the number of players and the settings you select which gives Ultimate Chicken Horse  countless hours of challenge and fun.

Games Finder is a Steam Curator and featured in the aggregate review scores data of MobyGames and Neoseeker.
FEATURED ON
Games Like Castle Crashers, Games Like Overcooked, Games Like Transformice
LEAVE A REPLY Cancel Reply