Valiant Hearts: The Great War offers a tear jerking story adventure with a few basic puzzles to deliver an intense emotional experience on a wide range of platforms. Following the story of several characters and a dog Walt through World War I it also aims to be a highly historically accurate game with references to events, settings and weapons throughout the story based on factual evidence and tied to the collectible item system. This focus on story and factual information was intended to help players reflect and remember the events of World War I as part of the hundred year anniversary in 2014. 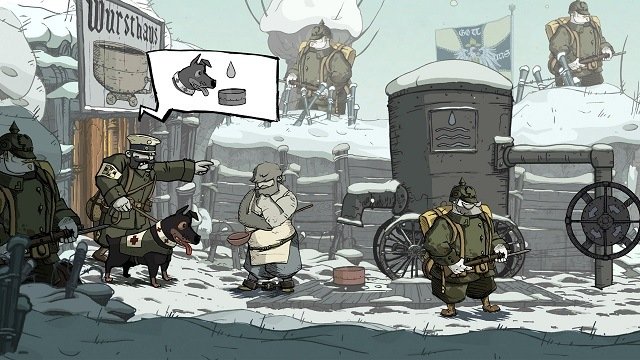 Starting right after the Archduke assassination in 1914 players are thrown into a world of Germany declaring war on Russia and France deporting any German citizens in its borders. Central to this plot is Karl a German citizen originally living in France who becomes separated from his Wife Marie and son Victor. To make matters worse Karl is then drafted into the German army while Marie’s father and Karl’s own father in law (Emile) are drafted into fighting for the French.

As fate would have it these two cross paths in German territory and escape together with a dog named Walt, an American French fighter Freddie and a nurse named Anna from Belgian. With a total of four characters Valiant Hearts: The Great War splits its gameplay across four chapters that explore each of the character’s struggles, challenges and thoughts about the war which ultimately ends in 1917 with the United States joining the confrontation in Europe. 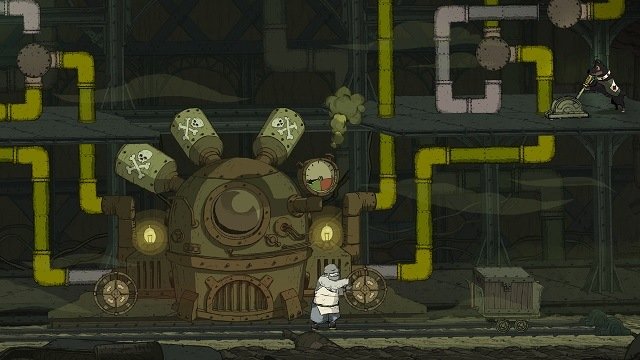 Valiant Hearts: The Great War is primarily a side scrolling puzzle game with players controlling the four characters movements, talking to NPCs, solving puzzles, finding key items and unlocking secret items. To help bolster the atmosphere and setting of World War 1 Valiant Hearts: The Great War also includes some action sequences such as stealth, car chases and even heavy machine gun fire from the enemy.

Puzzles are mostly designed around locating items to advance using the available skills of your characters which all have the generic ability to attack, throw items and move debris. Walt is the most versatile in this regard with the ability to issue him commands to collect an item, fit through a small hole or activate something on the map without bringing attention to himself. Meanwhile the other characters that you control in Valiant Hearts: The Great War present abilities such as digging, healing others and cutting through barbed wire that blocks your paths. Like many puzzle games there is also an underlying hint system if players are stuck at an area for a significant period of time and prevents you having to go externally for this information and potentially breaking the game immersion. 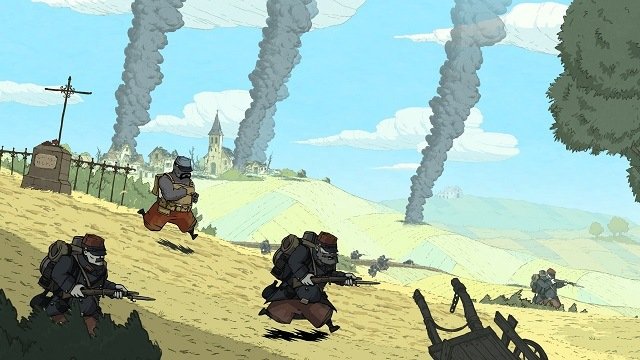 With an objective to create an accessible and memorable story adventure that could serve as remembrance to the struggles of World War I Valiant Hearts: The Great War has achieved its objective and thanks to its design decisions likely to remain relevant into the future.

Games Finder is a Steam Curator and featured in the aggregate review scores data of MobyGames and Neoseeker.
FEATURED ON
Games Like Machinarium, Games Like This War of Mine
LEAVE A REPLY Cancel Reply