Why run when you can fall? Unlike other endless runners Verticus has you falling through the sky, there are no lanes or paths here to limit your freedom with a complete 360 degrees of area for you to glide through. Originally an iOS exclusive launched in 2012 the game was subsequently enhanced for a Steam release in 2020 which features the same free price tag. In addition to shaking up the endless running genre by doing away with running entirely Verticus also has involvement from the famous comic book writer Stan Lee who also features as the main voiceover. 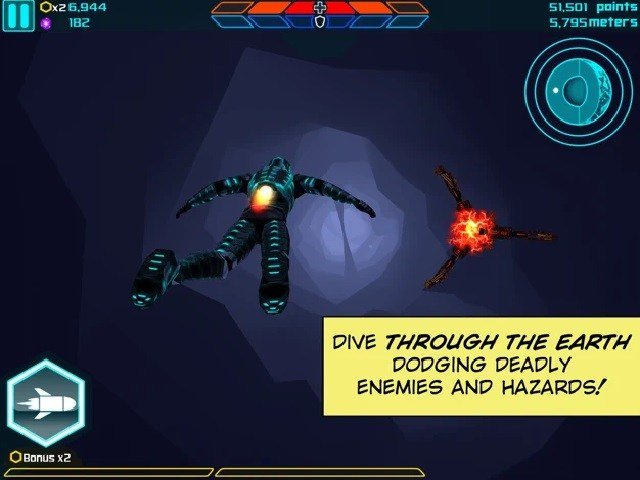 Verticus gives you a brief background of why it’s your job to fall endlessly from the sky to save the human race before plunging you into your a tutorial mission that shows you all the basics that you’ll need to master to get through falling in one piece. With your technological based jumpsuit that that provides heat resistance you’ll take your superhero human to battle against the alien race of Obliterators that are threatening the Earth. Like others in the genre this is just the first of many freefalls from the sky as you try again and again to beat your best score and purchase upgrades for the next attempt.

Verticus uses a traditional joystick control scheme which gives you much greater control over your character movements then most endless runners and is perfectly suited to both your mobile device or computer. This gives you the full range of 360 movement to dodge enemy mines, collect coins, activate power ups or pick up items to repair your suit which will all be randomly scattered through the level. 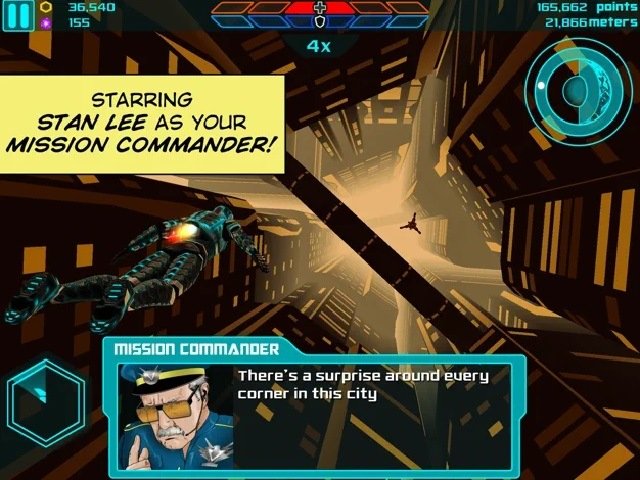 As you would imagine falling from the sky is a fast experience and Verticus captures this well with its animation that feels like you are falling towards Earth. For those that want to add even more speed there are a number of green speed rings that you can pass through to make your descent to Earth even faster. While you’ll be unlikely to utilise these often as a new player it’s a small touch that lets experienced jumpers quickly increase the speed to reach higher scores.

Verticus is split into four distinct areas (sky, city, underground caves and Earth’s core) to help you gauge how successful each individual run is going with each initiating at a fixed distance. Each of these areas also comes with their own varied obstacles to keep the game interesting from your first to last randomised run as you transition between these different challenging biomes. 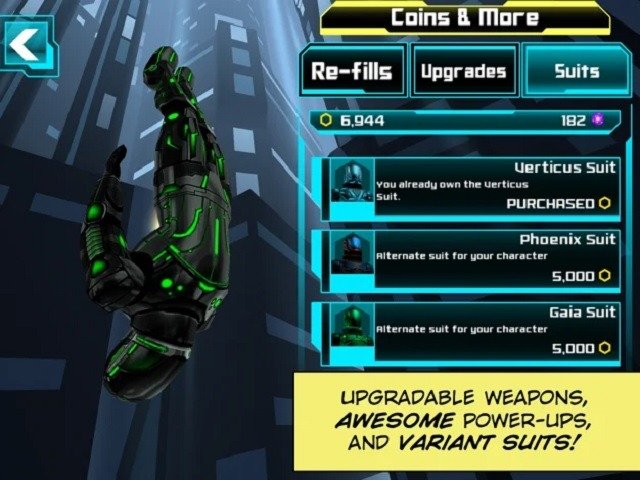 If you hope to reach the Earth’s core though you’ll need to carefully use the coins that you collect from your attempts towards various upgrades. These include different suits that come with different advantages to improved powerups, weapons (that are on a cooldown) and extra health or armour. Verticus also gives players a refillable weapon at your disposal which is a fantastic great addition as it gives you that backup option if you find yourself surrounded by mines with no other way out.