War Agent sticks you in the middle of an incoming war although you’re role in this escalating conflict is unlikely to be one you’ve experience before in a video game. In this free to play Android game you’re objective is to make as much profit as possible off the warring nations by giving them the equipment they need and marking it up as you see fit. 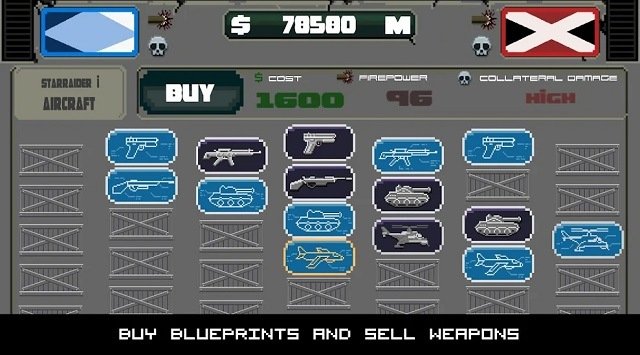 War Agent is more than just a game about drawing every single dollar you can out of the war though and designed to make you look deep into the messy nature of war and consequences of your own actions. While you’ll spend plenty of time reflecting on the actions you take outside the game while in the motions you’ll be unlikely to think twice as you sell weapons without consideration. Ultimately the gameplay though is about a fine balance as you want to keep the war going by supplying both sides with just enough fire power and nudge out any competitor sales but not enough that the war ends.

Your main screen in War Agent, known as the battle screen shows the two countries (blue and red respectively) fighting it out with their current available weapons. While this might start with pistols it quickly progresses to machine guns, tanks and more advanced weapons. Players will find that the nation with the current stronger weaponry will slowly push their advantage and if they consume the screen it will end the war entirely. 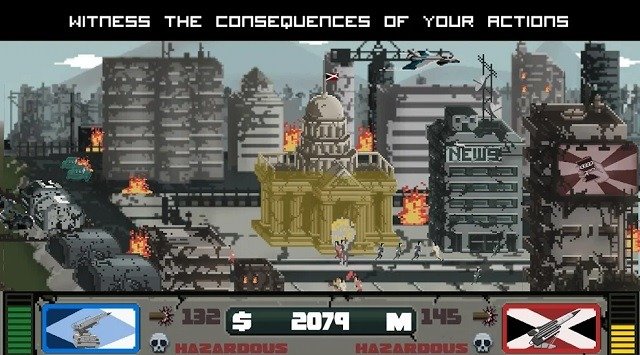 In return for supplying these weapons players will get a steady steam of cash to reinvest in more weapons or other efforts to keep the war alive. A key mechanic of the game though is that neither side will be happy with their current weapon for very long, which means the war quickly escalates from simple pistols to weapons with collateral damage on the population. Herein lies one of the problems of war and if players aren’t going to offer the stronger weapons your clients will turn elsewhere to other sellers.

Funds that aren’t reinvested in weapons can instead flow to the government or media of each side that have their own role in pushing the war further. The government buildings alter the nations willingness to wage war (represented as a percentage) and if it reaches zero that side will surrender. To prevent this players can use funds to bribe members of the government or invest even greater funds to completely eliminate those officials that oppose the war. 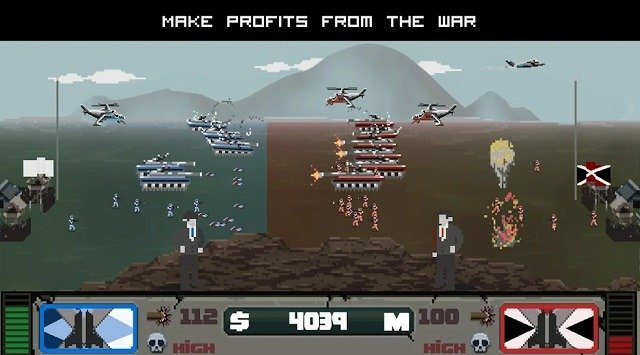 The media serves a similar function with monthly investments that can increase the popularity and willingness of war among the people although may create radical groups within the nation. Ultimately the goal of each game in War Agent is to achieve new high scores and achievements with every game reporting your total net profit along with civilian and soldier deaths.