Join the military ranks in War Clicks as you click your way to victory and beat your enemies in the competitive leader boards. Playable within your browser War Clicks takes the idle genre into boot camp with a military themed game based around developing your own army of soldiers, jeeps, tanks, planes and ships while competing against the rest of the world for rankings and bragging rights. War Clicks is the ideal game for an idle gamer who enjoys being a daily active user and is after an idle game with a little bit more of a competitive focus. 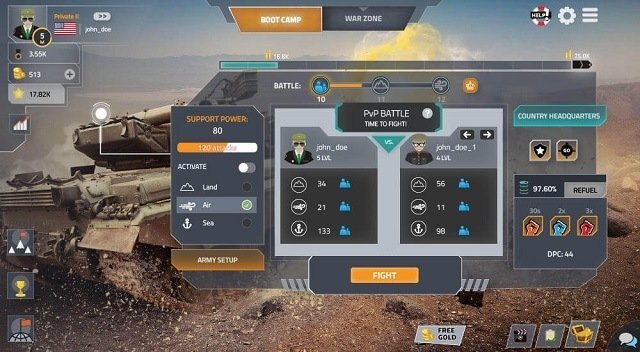 After introduction to General MasterClicker control is quickly handed over the to player with a standard idle clicker interface greeting players that many would be familiar with. This side of the game (referred to appropriately as boot camp) is where you’ll recruit your soldiers and other military units for Power Points (PP). The more of each unit you have the more PP that group of unit will generate which allows you to buy even more units or invest in upgrades that make PP generation automatic or more efficient to assist with the upgrade loop.

Other features of the Boot Camp include resetting your progress to provide permanent boosts and the ability to convert your PP directly to score or Battle Stars which tie into the War Zone element of the game (more on that later). Overall it’s a familiar formula for any game in the idle genre but War Clicks presents it in a crisp and sleek style and boosts the experience with solid sound design to attract players over it’s vast number of competitors. 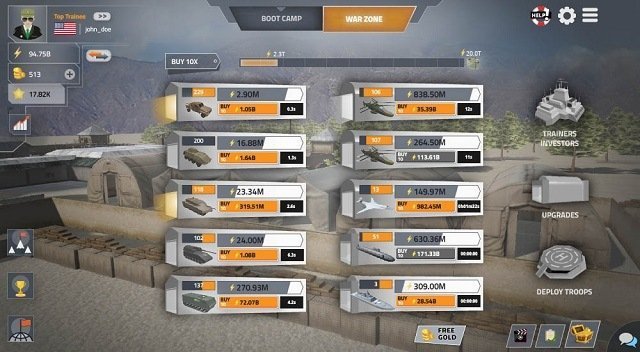 Your motivation to continue to progress through this loop is right in front of you at the bottom of the screen which shows the number of PP to the next rank with top players unlocking production boosting rewards for their efforts. While this does have the unfortunate effect of making top ranking players more likely to continue to earn rewards it does significantly incentivise competition which based on the traffic stats of War Clicks and community numbers seems to working rather than hindering players.

Similarly on the other side of the game (the War Zone) you’ll find a similar ranking system that encourages you to continuously progress for yourself and your country. These country rankings are just another layer of competition encouraging players to recruit friends and form community groups based on location and ties in nicely to the rest of the war theme. 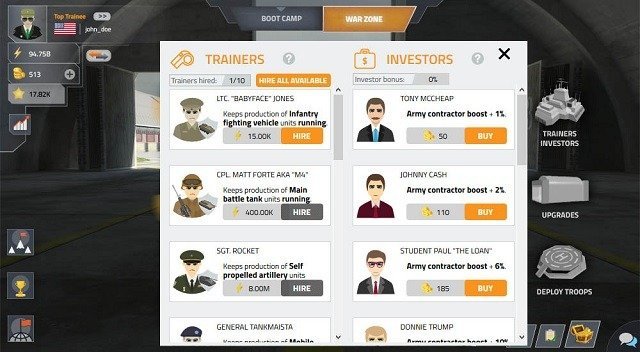 This War Zone represents the other half of gameplay in War Clicks and features a similar combat mechanic to other clicker titles. In this component you’ll be clicking as fast as possible (or relying on the built in auto clicker) to damage enemy units to earn score and climb the ranks. Similar to Boot Camp a currency (Battle Stars) is earned here and can be spent to improve your damage and thus efficiency for faster progression.

Despite its simple design War Clicks manages to be highly addictive with the addition of competitive rankings that translate into long term benefits. With a healthy community of tens of thousands of players behind it as well the competition can be fierce. This gives War Clicks the largest appeal to daily players of other idle or clicker games that want something with a bit more of a competitive focus.