Warhammer 40k: Dawn of War combines deep military strategy with a science fiction setting from the popular universe of Warhammer. Based on the tabletop games it has obvious appeal to fans of the Warhammer 40k physical tabletop war game but it is still an attractive real time strategy experience for newcomers to the franchise thanks to the robust mechanics and impressive campaign underneath the sci-fi skin.

After the success of the original base game three expansion packs were released to expand on the available factions and introduce new campaigns alongside them. With a Master Collection giving you access to Dark Crusade, Soulstorm and Winter Assault players seeking the full best value for money experience  will want to explore those options. While those wanting just a taste can look towards the Game of the Year edition which surprisingly lacks DLC content despite the GotY title. 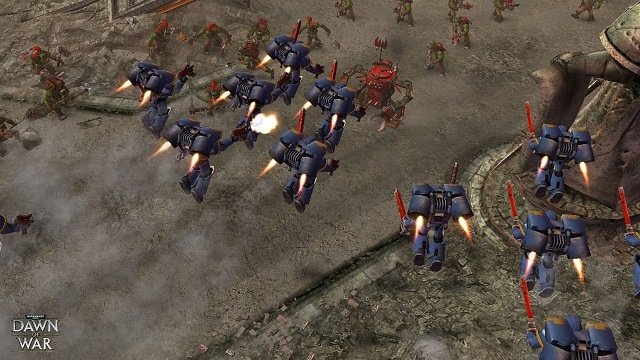 The main campaign of the series follows the Space Marines and there struggles against several foes (Orks, Eldar and Chaos) to maintain the existence of the human race from these deadly threats. Set on the planet of Tartarus players will bounce around the planet to different environments in order to face these threats and remove them from the planet while uncovering the underlying plot.

Each of these factions comes with their own units and strategies which will require you to carefully come up with your own counter strategy for each of them. Warhammer 40k: Dawn of War manages to deliver this strategy and the various counters through the campaign itself to ensure you aren’t bogged down by extensive tutorials that aren’t part of your core mission. With these mechanics clearly understood and presented to players you’ll be well equipped to fight the darkness that lies ahead. 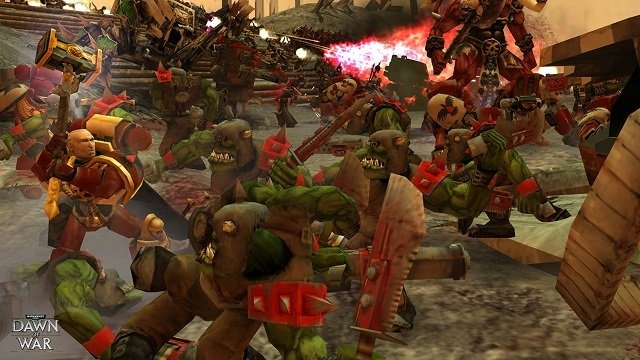 Gameplay isn’t just your standard real time strategy experience with the game focusing more on military tactics rather than requiring players to manage an economy tightly. Resources are gathered by holding key locations around the map using infantry units and can be fortified further to improve their resource generating capabilities. Combined with power stations this forms the basis of your resource needs and is a simplified but strategic approach.

Using these resources you’ll build the usual variety of structures that allow you to produce units and upgrade technologies. Units are split between infantry and vehicles with caps for each slowly increasing as you advance your technology capabilities. Another department from genre norms in Warhammer 40k: Dawn of War is that instead of creating individual infantry units players will create reinforce-able squads. The limit of fighters in each squad will depend on the unit (Space Marines for example spawn with 4 but can be reinforced to 8) and if the final squad member is killed the squad will be gone entirely. This interesting mechanics retains that ebb and flow of traditional strategy titles as you fight for control but does away with the need to recreate units from your base. 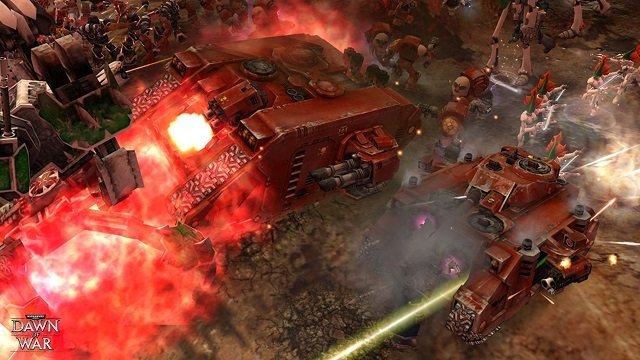 This combines with other strategy considerations such as cover and morale that can impact on your ability to fight and defend effectively. Players will also have to carefully consider the unit match ups to ensure they have a fighting force capable of dealing with any threat such as equipping marines with rocket launchers to counter vehicles.

While it steps away from some of the established strategy norms of the genre it does so with purpose ultimately turning Warhammer 40k: Dawn of War into a high tier strategy and story blend that keeps you focused on the warfare.

This review was first published on August 15, 2014. Read our update policy to learn more.