Weird Worlds: Return to Infinite Space is a rogue-like style space experience with trading, battles and plenty of exploration waiting to be discovered in the weird galaxy it presents. The game aims to keep each adventure to under an hour (most won’t even last anywhere near that) so there isn’t a huge time commitment required to roll the dice one more time as you attempt to achieve galactic victory (based on score and survival). 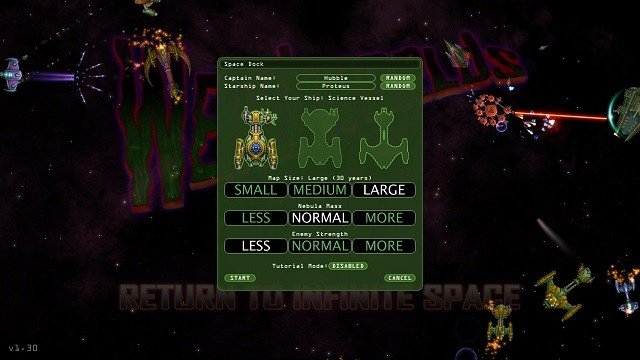 As one would expect from the rouge-like genre style adventure every time you start a new game in Weird Worlds: Return to Infinite Space the entire universe will be randomly generated for players to explore as they please. With planets, patrols, items, black holes, nebulae, traders and all sorts of other random events there is a huge replay factor to this space adventure as no two of your adventures in this galaxy will be the same.

Weird Worlds: Return to Infinite Space offers three ship choices that each have their own strengths and weaknesses for players to start their adventure with and each will push you towards a particular playstyle. For example players may opt for the science spacecraft with significant cargo space but few combat capabilities or go for the military craft instead that brings powerful weapons and armour into the equation but at the cost of space, while the third pirate class ship falls somewhere in between for those that want a bit of both styles. 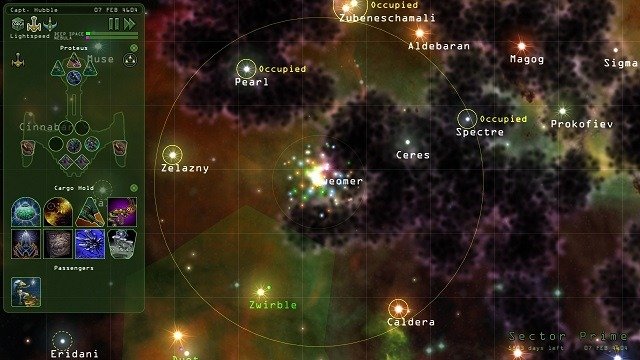 Other customisation options at this point of your adventure include choosing the map size, the nebula mass (which greatly slows your ship movement) and the strength of enemies that you encounter. While the options are simple they do give you enough control over the difficultly of the game to let you create an appropriate difficultly curve for yourself. Given there are still a large number of random elements though this is more of a difficult band than anything as you’ll still be at the mercy of random number generation.

Once in the game players will find themselves in the Glory sector of the universe and move from planet to planet by simple selecting your intended destination through the travel interface. Once you’ve arrived at your destination you’ll get information about what is at that location and either enter talks with the inhabitants, trade items or enter into combat based on randomisation.

Trade provides players plenty of opportunities to improve your ship with new weapons, thrusters, shields and more. Acquiring these items is not as simple as passing over galactic currency though with Weird Worlds: Return to Infinite Space opting for a completely barter based system that requires you to trade items of equivalent value (or more or less depending on the trader) to acquire new items. Additionally, players can return to Glory at any point that serves as a safe location to acquire weapons and combat some RNG. While it can be difficult to determine what parts are better and what exactly they do without some trial and error as the game avoids providing direct stats of items for easy comparison. 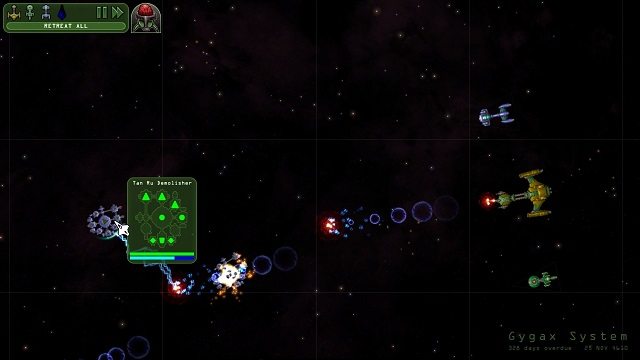 Combat in comparison to the rest of the game is performed in real time which means enemies and their projectiles will come at you fairly fast and quickly can become hectic. This is compounded further through the mercenary hire system that lets you recruit other ships to join your adventure and gives you control of their formation and actions in battle.

For short game bursts and those willing to experiment with all sorts of tools Weird Worlds: Return to Infinite Space is a fantastic galactic experience where you’ll compete against yourself for the highest possible score while mixing up the game parameters.