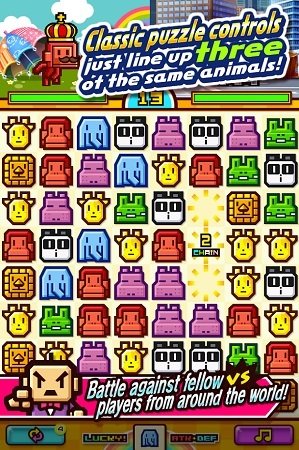 At the start of your Zookeeper Battle experience you’ll get to select your own adorable animal to be your avatar to represent you in the online landscape with options such as a monkey, panda, giraffe, hippopotamus, lion, rabbit, elephant and crocodile which all have a cute blocky art style, one that carries over to the rest of the Zookeeper Battle experience. Players will also have to select a unique name given the a competitive focused gameplay which is shown when you connect with others and also on the ranking leader boards.

Once you’ve set your avatar and name Zookeeper moves players into the tutorial which introduces the familiar match three gameplay but addresses some of the key differences such as tile designs, UI and more importantly how the multiplayer element works. 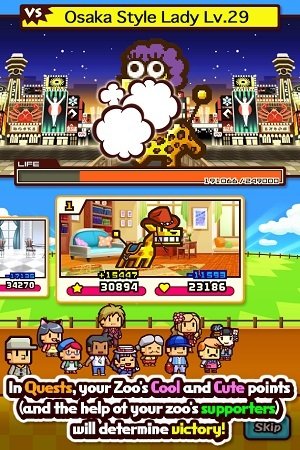 In each game of Zookeeper Battle players will be presented with a game board filled with blocky animals which are also the same animals mentioned as avatar options previously. Your goal as it typical for the genre is to match three or more of these animals together in either a vertical or horizontal line which will wipe them off the game board and give you an appropriate number of points based on the size of the match.

While that all seems simple enough Zookeeper Battle quickly becomes more complex. For example by matching monkey, panda, giraffe, crocodile or lion symbols players will generate attack points. While other animals like hippopotamus and elephant matches will generate defend points. Each game will also have a ‘lucky animal’ which shows at the bottom of the screen that will reward both types of points and changes with each match to provide some variety to where you should focus. This creates an interesting extra layer of strategy as you try to balance building up enough defence to counter your opponents attack points while also generating enough attack to get past their defences although in practice it’s often chaos as you simply match as fast as you possibly can. 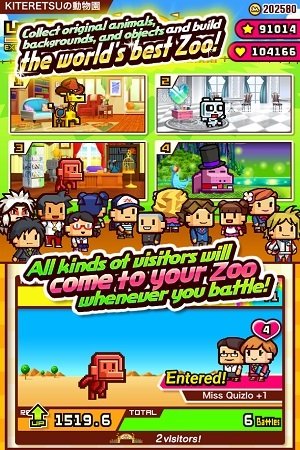 At the end of each round which lasts 30 seconds a players attack and defence points will be compared to your opponents with the person dealing the most damage labelled the winner. Alternatively if neither player is able to generate enough attack points then the game can expand up to 5 rounds resulting in a maximum game time of around 3 minutes. To create a sense of fair play Zookeeper Battles offers the same animal panels to both players albeit new ones  are generated randomly from this mirrored pool of tiles.

To keep you playing and pushing yourself to the next level Zookeeper Battle keeps track of countless stats and also ranks you against all the players in the world alongside having the ability to earn cosmetic items tied to your achievements. Considering Zookeeper has surpassed 10 million downloads you’ll start with a rank well into the millions you’ve got a lot of work to do.