Exploring the more silent and devious side of being a spy is SpyParty. Developed by Chris Hecker SpyParty is a unique game that sees players attempting to fool an opponent into thinking that they are just another AI controlled character amongst the crowd. 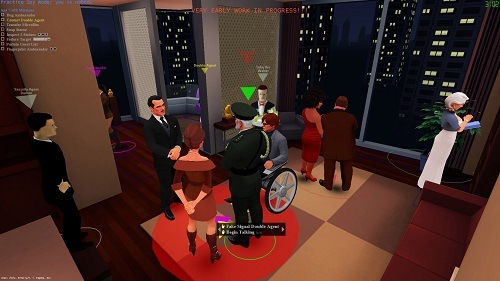 The game features two roles for players to choose from with one taking the role of spy within the room while the other plants themselves outside, viewing the activities through the scope of their sniper rifle and binoculars.

When playing the spy your objective is to complete a number of missions within the time limit such as bugging the ambassador in the room, making contact with the double agent or swapping a statue among others. While playing as the spy you’ll move your character through a third person view, giving you ample vision of the area along with a number of tools that can be used to throw off the sniper player.

This sniper role has full vision of the game room from several angles with options to zoom and mark interesting targets for better tracking. You’ll only have a single shot to hit your mark which creates plenty of time pressure as you balance gathering information with taking a shot before the spy player can complete all their missions. 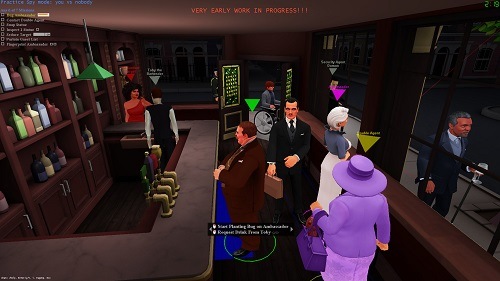 Variety comes in many forms in SpyParty but most notably the different maps, combination of missions, the varied cast of characters and the unique play styles of other players. All of which are likely to continue to grow as the game develops further into a full release title.

Few games get your heart beating like SpyParty, it’s extremely enjoyable on both sides of the glass as you calculate the best way to complete your missions or carefully observe the party goings to take your single shot.