Vainglory brings the massive growth of the MOBA genre onto iOS devices with a very impressive offering that is fun, fluid and deeply satisfying. With a capture and hold focus combined with diversity of strategy it makes the MOBA genre accessible to mobile phone gamers without sacrificing the level of depth that the big MOBA games bring to the table. 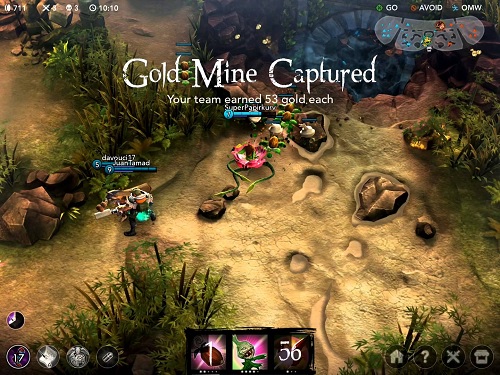 Games in Vainglory will generally last around 20 minutes which feels perfect for a mobile device. Each engagement is a 3×3 battle which takes place on a small one lane map to keep it action focused. In addition to the single lane you’ll find a dense jungle at the lower half of the map where you can slay neutral monsters, earn gold, improve your creeps power or win over the almighty kraken.

Nearly everything in the jungle is based around a capture and hold philosophy. If players can capture one of the two mines they’ll boost the attack and defence of their creeps while taking control of the central gold mine will deliver an influx of gold every so often.

The final key objective that you’ll find hidden away in the jungle is the powerful kraken who once defeated will storm down the enemy lane taking out any towers in its path. This capture and hold style is perfect for the mobile environment and means there is a distinct lack of a farming or laning phase, keeping your fingers busy at all times.

Vainglory offers a decent pool of heroes for you to step onto the battlefield with which of course have their own playstyles and role to play within a team. Each comes with three active skills which is paired with a single passive which feels just right in terms of character complexity. 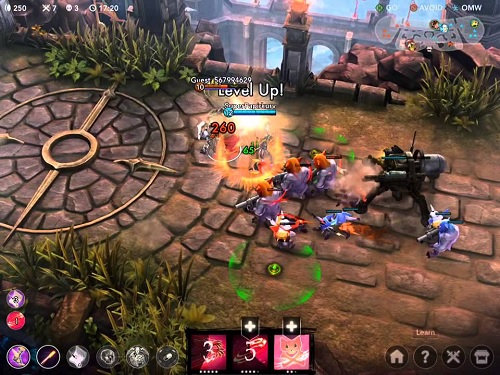 On top of skills you’ll be able to purchase items from the shop which fall under weapon, ability, defence, utility and consumable categories respectable. Vainglory does offer a decent amount of flexibility in terms of itemisation on characters that you do feel like you don’t have to always build the same items in the same order although this can be fairly character dependant (some characters have more flexibility than others). To ensure newcomers don’t feel completely lost in this department each character comes with a recommended item path which will get the job done in most circumstances without hurting your chances at victory.

Vainglory meets and exceeds its goal of bringing a high quality MOBA to iOS, the great graphics, solid mechanics and responsive controls combine to deliver a MOBA masterpiece.