Fight for free in Brawlhalla, a game heavily inspired by Super Smash Bros and available across all major platforms and mobile devices. Growing rapidly from its open beta started in November 2015 Brawlhalla challenges players to knock opponents off the game stage by applying damage to weaken them first. 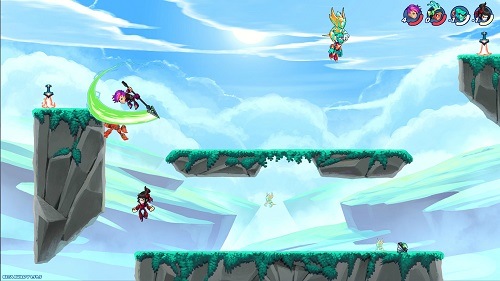 This objective stays the same regardless of the core Brawlhalla game mode you’re engaging in. Be it the 1v1, 2v2, 4 player free for all or the 8 player variant you’ll have to rely on your skills to beat out the competition and rise through the ranks. Brawlhalla isn’t only about it the ranked game action though and also includes single player fights against bots to hone your skills along with a number of more party orientated game modes for those wanting a more casual session. Brawlhalla supports both local and online play.

Your character for this game is one of over two dozen legends that have their own stats and signature moves to master. While you’ll need to unlock these with in game gold earned for each battle a weekly free rotation ensures you can try before you buy and always have a new character to test out.

As covered above you’ll be using your Legend to knock your opponent off the current map to claim victory. Just like in Super Smash Bros the more damage built up on an enemy allows them to be knocked back further, potentially securing a victory. Dealing damage is achieved through basic attacks and combos that your Legend possesses and can be enhanced further with items which broadly fall into two categories; gadgets and weapons. 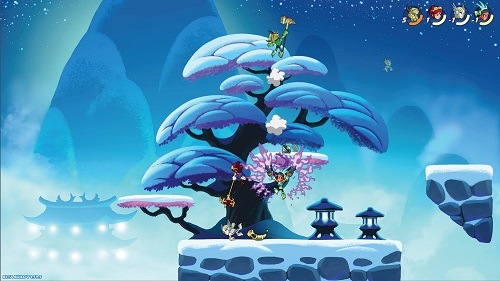 Gadgets offer things such as bombs, spiked balls and mines while weapons such as the hammer, bow, axe, spear, rocket lance and many more of which each Legend can use two (randomly assigned when interacting with a weapon pickup). Compared to other games Brawlhalla offers mostly a trimmed down controls approach with special moves being performed with a single button.

The free to play Brawlhalla is an impressive Super Smash Bros like title with a healthy roster of heroes that all feel unique visually and in terms of fighting style. With the large following the game has gained combined with a good variety of modes ensure a game is never far out of reach.