Tarkov Scav Case Rewards Loot Table – Is It Worth It?

Which is the best Scav Case option based on the rewards loot table and what can you get that makes it worth it? In this guide to the unique hideout module I’ll break down some of the rewards you can obtain and when you should use each Scav Case during your Escape From Tarkov account progress.

The Scav Case is one of the last available hideout upgrades in Tarkov and requires a significant investment to construct requiring a number of golden items like Rolers, neck chains and skull rings that often make it a multimillion Rouble investment. Despite this investment required it is usually worthwhile and something you can run constantly once constructed to slowly recoup your investment and ultimately turn a profit over the long run. With the introduction of the Scav Karma system you can reduce the time it takes for all options to return items to you.

The Scav Case is a particularly powerful tool due to all items obtained through this method having the found in raid (FiR) status meaning they can be used for particular Tarkov quests and the items can also be sold on the flea market where the majority of your profit will come from when using this hideout module. This fact when combined with the overall profitability means that the Scav Case is definitely worth it although the effectiveness of each option varies and is explored below including a summary of the best Scav Case option. An important caveat to this answer though is that it requires many case runs to make this investment back and if this is something you don’t intend to do due to lack of time to play Tarkov or aren’t comfortable you can continually fund the initial investment costs of each attempt then I recommend saving your Roubles and skipping this hideout module upgrade given it is not a prerequisite for any other modules currently.

With each option offering different loot tables, turnaround time and initial investment all of these have to be considered in determining the best Scav Case to run. I’ll also link to as many community tests and data points as possible for each to give you a sense of what your expectations should be along with my own personal screenshots.

The most useful of your options is the Fierce Hatchling Moonshine which players can purchase from the flea market or craft themselves if they have the Booze Generator hideout module. While the cost of the moonshine can be a barrier for players the Moonshine Scav Case loot pool is diverse and includes a number of high value items and in particular streamer items for the Collector quest. Geekseh has a wonderful 100 runs summary below which shows the diversity you can expect with weapon attachments, armours, barter items, medical and weapons.

VOX_E and Pestily also have similar summaries including a spreadsheet of the Moonshine Scav Case loot table prepared by Pestily for his 100 run analysis. Given all these data points it’s clear that Moonshine is particularly powerful for those seeking to obtain the Kappa Secure Container by supporting their hunt for rare streamer items. Beyond this point though the profitability of this option is debatable but the high turnaround time makes it a reasonable over night option to try your luck.

Many players explore the Moonshine vs Intelligence debate in Tarkov and the answer for the best option between the two is that it depends on your goals. The Intelligence option focuses on rewarding players with Tarkov keys which can easily be worth millions of Roubles for specific keys that hold their value throughout the wipe. The Folder With Intelligence can also be highly profitable early when the pool of keys with value is significantly higher due to players building up their available keys and quest requirements. Pestily discusses this in detail below along with another fantastic spreadsheet of data from his community.

In addition to the keys you’ll find a range of technology loot, stimulants and weapons which in themselves can provide value depending on the stage of the Tarkov wipe a position supported by reddit user Advanced_Lunatic with his beautiful interactive report of 50 Intelligence runs. The Intelligence Scav Case option is also the longest turnaround time making it another viable candidate for overnight runs when you aren’t logged into your Escape From Tarkov account. 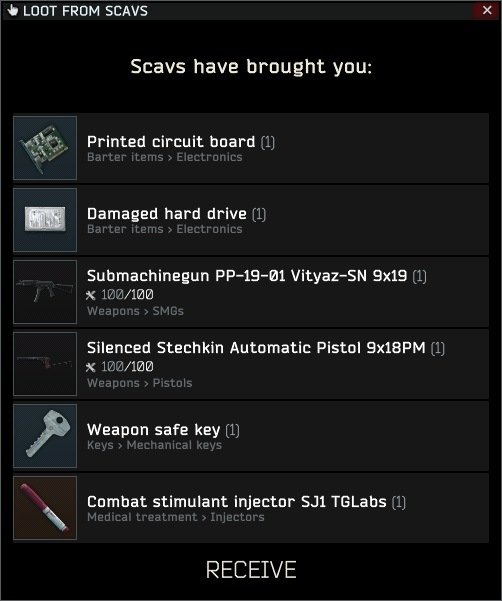 The real profitability potential of this option though is from players that regularly run Reserve as their Tarkov map of choice for loot runs and use a Documents Case in their secure container to collect all the Folders With Intelligence they find. While these can be worth several hundreds of thousands of Roubles themselves the ability to use them in the Scav Case when you die is an extremely effective method to convert your unfortunate deaths into profitable outcomes or at least cost recovery for the gear you took into raid and lost.

Of all the Rouble based Scav Case possibilities the 95k (previously 85k and 70k in past wipes) option has been shown to be the most profitable and I’ve even personally had a Red Rebel Ice Pick from this option among many in the Tarkov community. If you intend to invest Roubles rather than items (Intelligence or Moonshine) into your Scav Case this is always the option I would use and one that has been a consistent profit source for myself over multiple Tarkov resets. The 95k Scav Case offers a diverse reward loot table and primarily includes keys, weapon attachments, barter items and ammo. 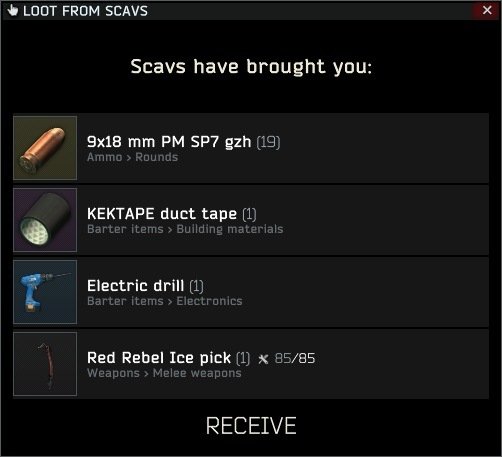 Consistent across all the Rouble options is that your profit will primarily come from once off big item hauls that can regularly provide millions of Roubles. Items from the 95k Scav Case between these big wins though you can expect to break even or make a small loss so using this hideout module is a long game and not one that you should do lightly.

If you are on a tighter Rouble budget then I would consider running the highest Rouble option you feel comfortable with instead although be aware the profits are proportional to your initial investment. EUL Gaming has a great source of data and video (below) with potential rewards along with a breakdown of the profit that shows the source of big win profits I have discussed above and something also shown on this reddit community post by Schwahn.

Offering approximately the same turnaround time as the most expensive option at around 2 hours the 16k Rouble option (previously 7k in past wipes) offers a similar loot table albeit will generally give you one less item than its more expensive counterpart above. This option has limited community testing but from my experience can generally turn a small consistent profit through the weapon attachment and barter items you will obtain. I’ve never received any big ticket items from this option although it’s important to note it is also the one I’ve used the least along with the community. Given the consistent profit though I still recommend this as a backup option to the 95k Rouble Scav Case when money is tight and you want to grow your Rouble stash (albeit slowly).

While the mid tier Roubles Scav Case is unpopular the 2.5k (previously 1k in past wipes) option is almost completely ignored by the community (myself included) although it’s quick turnaround time makes for easy data gathering. Generally providing between 1 and 3 items of low rarity this option seems to turn a consistent profit although at a low rate.

My experience of the low price option includes weapon magazines, ammo and food items some of which can sell upwards of 10k on the flea market or sell to traders for more than the initial small investment. This does make the cheapest Scav Case option profitable and ideal for the players that have a limited supply of Roubles and the patience to check in every 40 or so minutes to collect their items.

What Is The Best Scav Case Option In Tarkov?

With all of the above you’ll see that the best Scav Case option depends on your goals given the different reward loot tables they offer. My general advice is to follow the principles below (in order) to determine which you should be running on your Tarkov account.

With the above in mind you’ll be well equipped to maximise the value from your Scav Case hideout module. Comment below which Scav Case option you run regularly, what is your biggest successful run to date and your thoughts on is the Scav Case worth it.